The Hyperkin Duke Wired Controller - Has Science Gone Too Far? 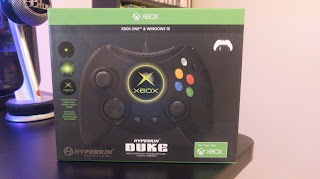 My school growing up didn't do the Console War thing. Whereas the schoolyards elsewhere were a dogfight of Nintendo versus Sega or Microsoft vs. Sony, our little rural town of Ohio was a veritable worker's paradise. In the halcyon years of 2001 and 2002, some our friend group owned, PlayStation 2s, some GameCubes, and the occasional Xbox. (The three of us who had bought Dreamcasts had fled to the other consoles by this time.) Instead of the typical school yard pissing match, we discovered the radical idea of going to each other's houses to play each other's consoles.

Small town communities can really shake out a lot of different ways.

Microsoft was a bit of an enigma to us at the time. We presumed the Xbox wasn't going to be much more than a Dreamcast 2. A short-lived console with some promising looking titles that would stretch our junior-high budgets too thin to buy yet another console this generation.

But our friend Matt took the gamble. The only one of us to take the risk of buying an Xbox at launch; he was naturally who we turned to when news of this Halo game surfaced. Word was the local multi-player was pretty good. We were also told that Fuzion Frenzy was the superior successor to Mario Party. Our information was sometimes incomplete.

While Halo proved to be a good time, and Fuzion Frenzy proved to ... not, we made another discovery. The Xbox had a stupidly ginormous controller. 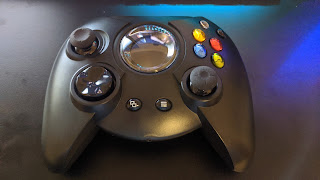 And that made sense to us. The Xbox itself was the biggest console to date. It was marketed towards a "mature" audience. It wasn't made from a Japanese manufacturer with their "obviously" smaller hands. We saw the DUKE and we were impressed.

It wasn't until years later that I found out that that Duke was overwhelmingly unpopular. So unpopular that Microsoft stopped shipping this Titanic controller with the console and replaced it with the 'S', the smaller and more ergonomic controller that was shipped with the console in Japan. Turns out controllers are a certain size for a reason.

But I've always held a fondness for the Duke, even though I've never owned one. I didn't buy an original Xbox for myself until my adult years. I'm hesitant to buy used controllers online if I can avoid it and I've only ever found 'S' controllers in person.

I don't know why I like the Duke so much. But it does feel substantial and I like the button placement and distance. The GameCube controller looked like a toy comparatively. I'm not someone with a robust 'American' frame. I'm about average height at 5'8" (172 cm) and, presumably, have the proportional hands to go with it. But the Duke always felt proper in my hands. This is in contrast to the Nintendo handhelds over the years. The button distance seen on the DS, 3DS, and Switch joycons are too close together for long play sessions. Perhaps I'm just a bit ham-thumbed compared to most, but I find the PS4, Xbox One, and Switch Pro Controllers to be just about perfect. The Duke, however, has always struck me as an excellent fit for my hands.

So it was definitely on my radar back in 2018 when Hyperkin announced a modern day Duke controller with USB plugs for Xbox One and PC. It was expensive though, costing more than a standard Xbox One controller and I just presumed I'd need to pick one up used years down the line. But the thing always seemed in stock at various retailers. Amazon's Prime Day had one for cheap and I pounced on it. 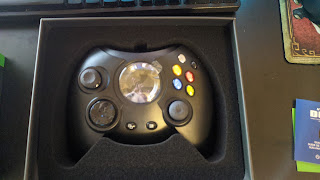 The packaging is certainly premium. The controller is nestled in stiff black foam and comes with a small card thanking various people for their work on the controller. It gives off the impression of unboxing a successful Kickstarter project. And that makes sense: what could have possibly been the market for 20 year old failed controller? It's a niche product for enthusiasts and its treated like such.

First impressions? It's big. Just unnecessarily big. Comparing this thing to its successor, the Xbox S controller, is a laugh. 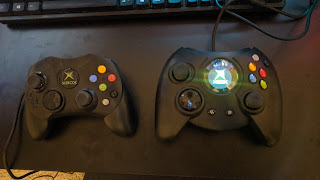 I thought I remembered how big this thing was but I apparently did forget. But it's easy to see why this wasn't a big deal to me back in 2001. Having owned a Dreamcast, I was used to unusually large controllers that had two slots for plugging in memory cards. The Xbox really did feel like the Dreamcast 2 to us at the time. And that begins to segue into discussing the features of the new Duke. 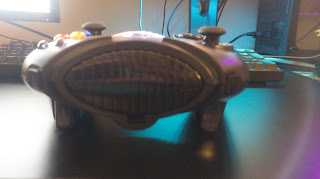 What happened to those two memory card slots? Replaced with a bit of plastic that looks a bit like a vent. It keeps with the overall "edgy" design of the controller. It doesn't look out of place. The other big feature? The animated jewel in the middle of the controller. The classic controller just featured a graphic of the Xbox logo. On the new Duke its literally a screen that shows the original Xbox startup animation whenever you plug in the controller. It's a complete gimmick and probably responsible for the higher price tag. It's cool the first few times but then I stopped noticing it. If the controller had a small speaker the like a Wiimote to also play the startup sounds it would have had more impact. 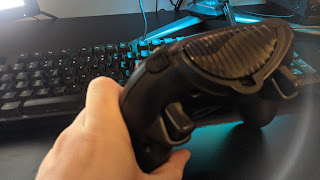 As for playability it mostly does pretty well. The analog sticks, face buttons, and triggers feel great. I think they feel better to the press than the Xbox One controller does, but mine just may be worn from use. What isn't great is the D-pad and the shoulder buttons. The D-pad isn't really a D-pad, it has some amorphously round shape that never really felt right. This was corrected to a proper D-pad in the original S-version, but the new Duke is accurate to the original. I won't be using this controller to emulate any 16-bit platformers.

The original Duke didn't have "shoulder" and "trigger" buttons like modern controllers do. It just had triggers plus a white and black button located on the face of the controller. The Duke keeps the white and black buttons, but also adds contemporary shoulder buttons near the top of the controller that duplicate the black and white buttons. The problem is that the shoulder buttons are in a terrible place ergonomically. The controller just isn't shaped to accommodate these. You basically have to reposition your entire hand every time to reach the shoulder buttons, which isn't acceptable in actual gameplay with modern titles. 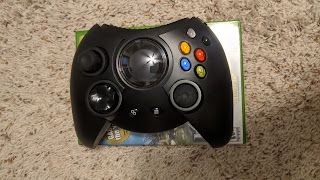 And then there's the last big flaw: the controller has no wireless capability. That wouldn't be a deal breaker if it was priced like other 3rd party wired controllers but instead it's more expensive. They had literally all the room in the world to work with here and they didn't fit Bluetooth capability into the thing. The animated jewel is nice but I would happily trade that for wireless. As a last major nit to pick, the wire is just a simple USB micro cable and doesn't include the breakaway dongle feature the original controllers had. This was a small segment of the controller's cord that was designed to easily unplug in case someone tripped on the cord. It was a great feature that was never repeated. I'm sure manufacturing something radical like that at such a small scale was impossible with the new Duke, but it would have earned Hyperkin bonus points in my book.

So there are definitely some negatives here. But that was always going to be the case, it's a recreation of a flawed controller that introduces some flaws of its own. It's a bit of gimmick, especially at $70 retail. I think $30 is probably a more reasonable price to pay to indulge in a bit of nostalgia. The parts of the controller that work well really work well. Playing the Master Chief Collection on my PC with a Duke controller is a surreal and pleasant experience. I suspect the controller is more likely to go on my wall as art than see everyday use, but I'm glad to see a niche product like this find success.

And yes, I checked. It still works with Fuzion Frenzy. The game still sucks, but the controller works just fine.