My Complaints about Blogger, the Shire, Cereal, and My Inability to Phase Through a Graphics Card

For now, I want to return the blog back to a journal style site. I know I'm whiplashing the blog around but I'm stuck at home and bored. And when I'm bored I tinker with things that are working perfectly fine.

At least a blog is a lot less expensive to replace if I can't manage to get it back together again.

The march of progress continues on unstoppable. For a Google product, that means tinkering and overhauling it while stripping away features and eschewing your current audience in favor of one that probably doesn't exist.

The now inevitable Blogger Redesign is just a "mobile-friendly" version of the site. I think it looks ugly and it makes the dashboard less dense with information. I shouldn't have to scroll through this much to find information I need on a large monitor.

Blogger will allow use of the "old" site for now, but Google kills off actual viable products all the time, there's no chance that a now niche product is going to keep two different versions of the same site.

But I've had problems with Blogger for while longer than this recent development. Recently I found they removed the ability to create pages independent of the blog with their own custom URLs. I don't really use social media and I'm tepid about using flaky cloud services to share things like photos. Recently, I tried sharing a page of my dog's birthday party with my family and it turned out to be way more difficult than it needed to be. The URL to that page is still a mess. I want to do more things like that. Also, things like margins and resizing photos are just a little bit funky. Thus the change.

I haven't been posting this week because I've been working on a new design for this site. I'll probably end up using WordPress for the actual blogging software and something like Digital Ocean for the hosting, but I want the actual HTML and CSS to be by my own hand. I want to create pages outside of this specific blog, but are still tied to this same domain.  This was always the plan way, way back in the day when I started this blog. I obviously have some free time on my hands nowadays, so better late than never.

To borrow a phrase from a once great game developer: The redesign will be out soonTM. 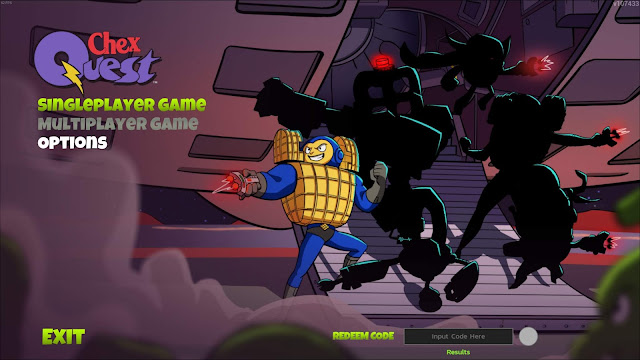 Back in the days of my youth, access to cheap or free games was limited. Every release that made it's way into my grubby hands was a nectar from the Gods. So desperate were these times that one was often forced to terrible acts to obtain gaming goodness.

One of those acts, I am ashamed to say, required the purchase of some god-awful cereal. 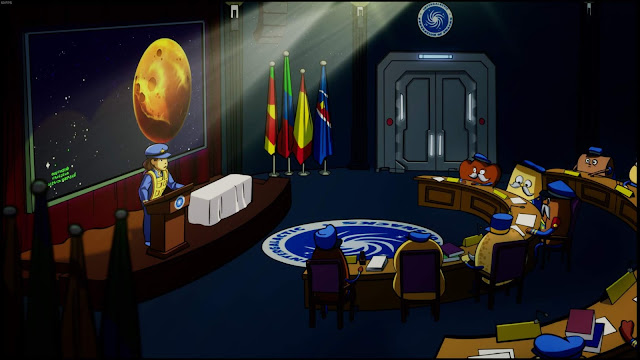 Seriously, who eats Chex? Just tear up an Amazon box and pour milk on it. Same thing. Probably the same nutritional profile too. 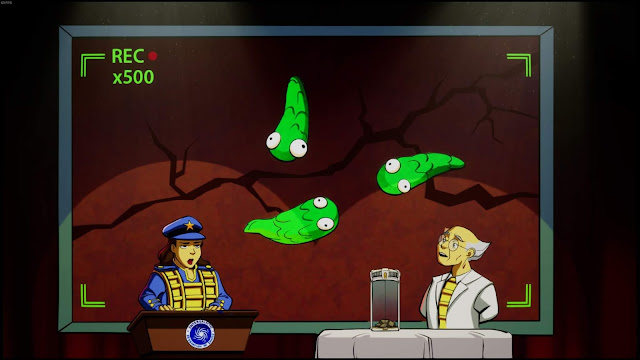 Anyhow, for those not in the know, Chex Quest was a 1996 promotional game included in boxes of Chex. It was a first person shooter based on the Doom engine. Unlike Doom, it was a family-friendly affair. One does not shoot aliens, they teleport them back to their home dimension. 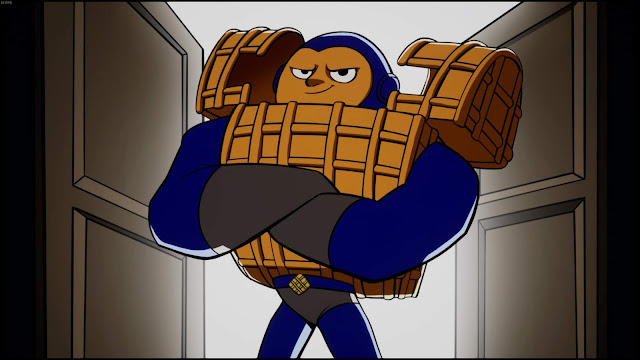 It was relatively short, but it only cost the price of a box of cereal back in the 1990s. Which was probably like a quarter. I don't remember, I was 8 at the time and wasn't doing a ton of grocery shopping.

Skip to today and the recently released Chex Quest HD. It includes all five original levels, plus some local multiplayer action, and additional characters to play as if you purchase bags of Chex Mix with the corresponding codes. Or just copy the codes from the Internet because I'm not making a convenience store run in the middle of a pandemic for character codes in a multiplayer mode that no one will play in a week. In fact, here are the bloody things:

Put the code into the prompt on the menu screen. 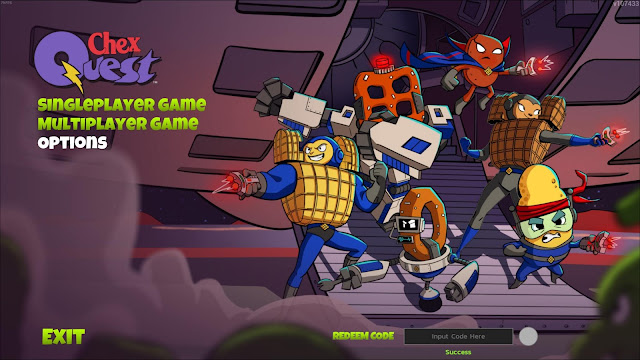 Does it hold up? The gameplay actually does. For a free, kid-friendly game this would actually be kinda perfect for an hour or two of play. 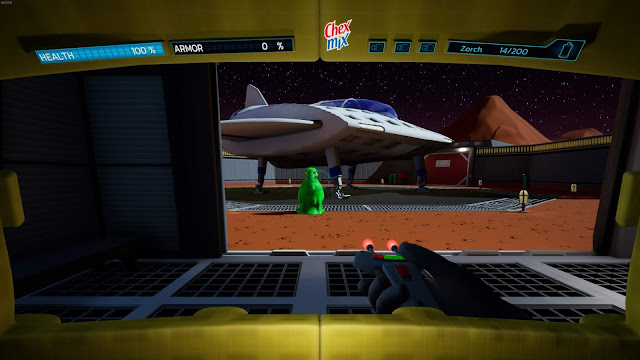 What lets it down is the terrible performance of the game. Moment to moment gameplay is somewhat choppy and everything feels like its in slow motion. I have this problem even on the lowest graphical settings on the lowest resolution. For the record, I have a RTX 2080 paired with a i7-8700K. I can run Battlefield V at 4K resolution with 60fps. Chex Quest is not optimized well and it makes gameplay distracting. It runs on Unreal Engine 4, we know the engine can do much better than this. 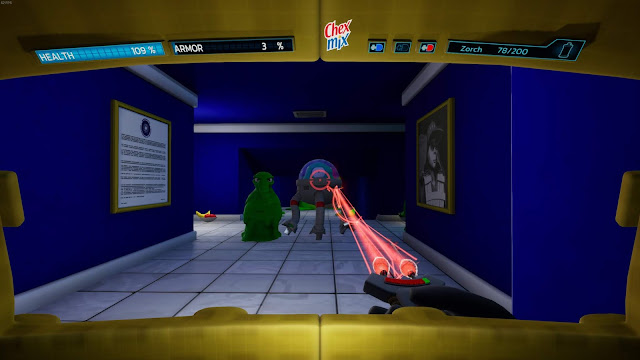 So hopefully they update it with some improvements. It won't matter to me. It takes about 1.5 hours to finish the game and there's no real reason to go back. No Steam Achievements. Apparently each character gets a different ending scene. But I'm going to be honest with you. I don't go deep catalog into Chex Mix Universe. 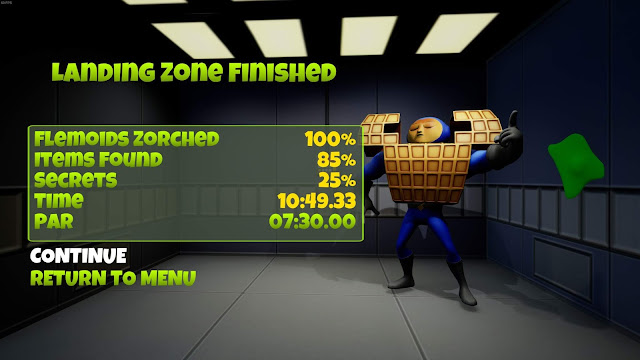 Installing New M.2 Drive
An M.2 drive is just a fancy hard drive. It combines the speed of a standard solid state drive with the ease of installing a stick of RAM. Find the M.2 slot on your motherboard, unscrew the screw sitting nearby, slide the drive in, and then screw the whole thing. In and out, should be a 2 minute process.

That's the theory of course. And a theory I mistakenly believed in when I bought this thing.

The reality is that the screw needed for the drive was sandwiched in, almost perfectly, in between the fan for my CPU cooler and my graphics card. In order to get to this screw, I had to unscrew and unseat my graphics card, and then disassemble part of the fan. It's not that big of a deal, but it is certainly more than I bargained for.

The culprit here is my motherboard: the MSI Z390-A Pro. It's a large motherboard with room to have put this M.2 drive anywhere it pleased. Sandwiching everything together like they did was asking for trouble, and trouble I received.

My next computer is going to be the size of a small car. Not because I'll need the space to fit all my components, but so that I'll have the space needed to upgrade and maintain my computer without needing to take up a second hobby as a contortionist.

Lord of the Rings Online
The Shire killed me. I was excited for it. After doing the relatively uninspired Dwarf and Elf starting zones, I though I had saved the best for last. I like Hobbits. I like the Shire. I liked seeing the Shire. But all those running around quests? Delivering pies and mail on foot? LOTRO's version of the Shire is crap. Looks nice, plays like a shopping cart with uranium blocks for wheels.

Ironically, the day I write this I read two different posts in my RSS feed showing love for LOTRO's Shire: Syp and Eliot Lefebvre at MassivelyOP. But both writers of these posts openly credit nostalgia. I do not posses such a thing. The only character I played back in 2007 was a Human leveling in Bree-land.

I did finish the Shire. Every quest in the zone on my Hobbit Burglar. I have every starting experience finished now, at least of the four races that launched with the game. With that done, it was time to return to my Human Champion in the Forsaken Inn. But when I got there I had to read through and accept about 15-20 quests. That's too much reading even for a Tolkien game. My sub ran out the same day so I'm going to let LOTRO cool by the fire for a hot minute. Play some other stuff, and then jump back into it later. Or maybe not, I finished up the base game for Everquest II and haven't been in a huge hurry to get back to that one either. But my moods are cyclical. Anything can happen.