Nintendo Account Two-Factor Authentication
It seems there has been a rash of stolen Nintendo/Switch accounts, so I activated two-factor authentication as detailed here. It uses Google Authenticator, which is an app available on both Android and iOS. Since a lot of people keep their credit card information tied to their account, it's probably a good idea 2fA enabled. It's probably a good idea to have it enabled on all your game accounts that support it, considering just how valuable game accounts are on the 'black market'.

I would have activated 2fA long ago if I had known Nintendo supported it. Considering the archaic nature of Nintendo's entire online infrastructure, I'm genuinely surprised they had it at all.

StepMania 5.0
After waiting 24 hours for my new Dance Pad to unfurl itself, I'm ready to actually dance on the thing. But that wouldn't be much fun unless I had some software to dance along with. As far as I know, there really isn't an official Dance Dance Revolution release for the PC that I can buy. Thankfully, there's a very popular open source alternative called StepMania that's probably better anyways. 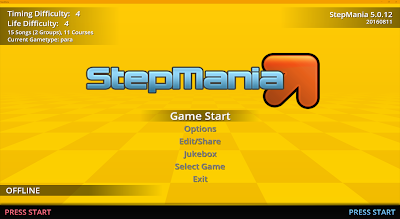 The documentation for StepMania isn't great. It's admits as such on the website, but we'll power through. The "beginner's guide" is a text file that likes to discuss a lot of things beginners don't care about like feature sets on previous versions of StepMania. Compelling stuff.

The key mapping in the program is almost deliberately obtuse. The mapping for "Menu Left" is presented first, but this is different than "Left/Menu Left" which is what you actually need to map if you want to hit notes in the game. Dumb, but we figured it out.

Then we hit our second, much cuter obstacle. 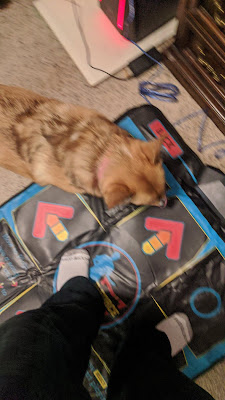 While I appreciate her enthusiasm, the poor girl has no rhythm at all. I don't think her legs are long enough to play DDR at a high level either. Thankfully our computer room has glass doors so I can relegate her back to the audience.

I have to say, I paid $80 for the Dance pad and I very much feel ripped off. It really is a carbon copy of the shitty old dance pads that would come in a bundle with the PlayStation 2 releases of DDR. The bottoms of these mats are not sticky at all, and on carpet they slide everywhere while you play. Nothing about the build quality says "premium". The foam padding that comes with the "Deluxe edition" is of questionable use. Questionable, as in, I literally don't know what it's supposed to do.

There isn't really a raging market for DDR pads in 2020. It's not a wonder that the handful of companies still making a niche peripheral can pretty much charge what they want. But if I decide to splurge for a second pad, I'll either assemble a metal pad similar to what the arcade machines have or eBay a cheap cloth pad and splice the end off the connector and replace it with a USB.

So the hardware is overpriced junk and the software is a bit janky. What other complaints do I have? Actually getting songs into this thing isn't too hard:
No complaints there. These "packs" are a collection of files that usually include multiple songs in .ogg format, a dance chart that is the arrows you match on your dance pad, and often some UI elements such as banners or even a music video in the background while you play.

The complaint is actually trying to find dance charts that don't suck. It's a niche scene and most of the players are highly skilled and your average pack represents that. My wife can play DDR at a difficulty of about 1-3. I play about 4-6. The average difficulty of a downloaded song is 10-12. Songs at that level aren't even recognizable as dancing at that point. Players buy metal dance pads, cover the thing in shoe polish, hang onto a guardrail, and slide their socked feet to arrow as fast as possible. It looks like someone falling on ice in fast forward. I get why people play that way, but it holds no appeal to me.

Thankfully, there are some blessed souls in the world who have made song packs playable by beginners. Even better, my wife tracked down a pack of 250+ pop songs that is perfect not only for us, but if I can rope any other "normies" into playing this thing.

So complaints aside, am I having fun? Absolutely. This is honest to God the most fun I've had since this whole self-quarantine began. This might be the most fun I've had with a video game in years. Mrs. Everwake and I played into the morning, alternating turns as we got tired. I suspect we will do it again. I'll need to figure out a way to secure this dance pad to the ground though, songs with large amounts of jumping or crossovers send the damn thing flying. So that's today's project. But either way, I will be back for more.
Posted by Everwake at 12:11 PM