Dance Through a Pandemic, or Maybe Stab Some Birdmen


As far as exercise goes, I both enjoy running and hate it.

I enjoy the accessibility of it. Put on my shoes, go outside, and run. I tend to resist activities that have a lot of initial "friction" to them. Getting in the car, going to the gym, dealing with people, swapping equipment, wiping equipment down, etc. That's really never going to happen. But running can always happen.

Unless it's really cold out. I live in Minnesota so this is often the case. Thankfully, we have a treadmill. It's an older model with a plug in for an "iPod" but it does the trick.

Running in place is really boring though.

We have a small TV set up in front of the treadmill now, but I don't really watch much TV so that's not all that helpful for me. I'm not coordinated enough to play a video game while running, although I have been wondering if focusing on slower old-school JRPGs might be the answer there.

But either way, I've been looking for an alternative solution. After having been inspired by a trip to the arcade over the Christmas season, I finally pulled the trigger to cure my pandemic mopiness. 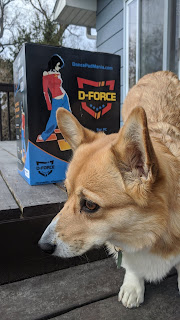 EverDog, get out of the picture! 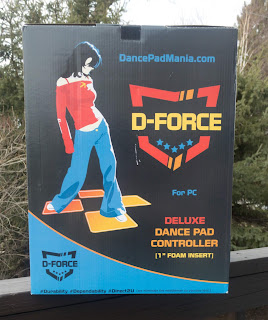 There we go. If you are unfamiliar with the late 1990s/early 2000s, it's a dance pad in the Dance Dance Revolution vein. This particular dance pad can be found here. I haven't used it enough to recommend it or not. It feels expensive for what it is, which is a copy of the cheapish dance pads that came in a bundle with home releases of DDR. But it's a generally recommended model whenever I google search for such a thing, so we'll see how it goes.

Install was pretty basic. The box comes with two parts. 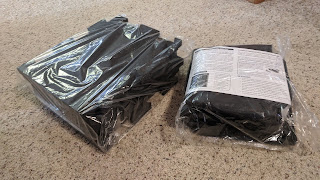 The first is the dance pad itself in all of its wrinkly glory. 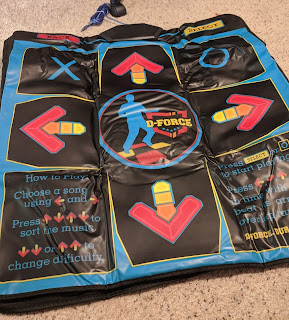 The dance pad has a zipper around it's edges, which allow you to insert the second package: jigsaw foam pieces that provide padding and stability for the mat. 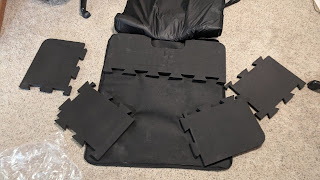 Ironically, I have the same type of jigsaw foam pieces underneath my despised treadmill.

The instructions stipulate that I should wait 24 hours before using the product after shipping. I presume the sensors and wires inside get shifted during shipping and need time to return to their original place? I don't know if I 100% believe that, but unlike the unmasked goons at the local grocery store, I'll follow basic directions for the greater good anyways. Besides, tonight is D&D night.

Dungeons & Dragons - 5th Edition
Tonight's campaign has been similar to the past couple nights of D&D: roleplay light. To recap the campaign so far, we need a MacGuffin, so we hired a guide to lead us to it, but she'll work for free if we help her get her own MacGuffin. It's MacGuffins all the way down. Tonight's session had us climbing a tower full of sentient bird men who chucked spears at us from afar. Until they ran out of spears, then they had to get in close and that's when we stabbed them. Once suitably stabbed, we grabbed our guide's MacGuffin and are now going to return to the area's capital to spend some of our hard earned cash and figure out the road to the main MacGuffin.

So obviously the story line isn't anything much at this point, but I believe we are playing one of the pre-written modules by Wizards of the Coast, and a beginner-friendly one at that. I don't want to look up what it might be for fear of spoiling myself. That's all fine and dandy, I'm not that passionate about roleplaying, this is just a convenient way of spending time with a friend who I don't get to see anymore since we've moved.

What was a bit of friction was the leveling up process. We hit level three in the middle of this session. As a fighter, this necessitated me making some decisions about my character's build. I had to pick one of seven different 'Martial Archetypes' which would basically decide what my "real" class is, as 'Fighter' just seems like a generic dude with weapons of some sort. So far not a problem. But after I picked 'Battle Master' I then had to pick 3 'Maneuvers' out of a list of 16. This took a while and I felt like I was holding up the session. This isn't helped by the fact that Fantasy Grounds doesn't actually include Maneuvers into it's UI. I now have to use a Notepad file to keep track of which Maneuvers I took, what they do, and whether I used them that session or not.

Perhaps I need to start planning my character in advance to avoid this sort of thing, although I suspect my fellow player's will also have complicated levels like this coming up. I'd rather treat leveling like a birthday gift; let it be a surprise what new goodies I get. But that might not be what's best for the quality of play. I am concerned that if I start researching these matters beforehand I might descend into munchkinism. But perhaps that's a chance I will have to take.
Posted by Everwake at 10:16 AM