Phantasy Star Online 2 and Some Troubleshooting

Taking screenshots on the Xbox One is an awful experience. You have to press the big 'X' in the middle of the controller (I think it's called the guide button), and then press Y. This is in contrast to the PS4, Switch, and PC where it just takes a quick button press. And then actually getting a hold of the pictures is a pain in the butt. I can access my Xbox Activity Feed through a browser and see every screenshot that I took. But I can't right-click my own images to save them. It's like a crappy mid-2000s bit of JavaScript that disables right-clicking to protect their images. Except they're not Microsoft's images, they're mine!

Trying to share the images through the Xbox console app via Twitter causes a confirm prompt to pop up. Except that immediately closes itself before I have a chance to do anything. I have a bunch of screenshots on this device and absolutely no way of doing anything useful with them.

Then I found a feature hidden in the depths of the Xbox console itself to manually upload each screenshot to OneDrive, Microsoft's cloud storage product. This would actually work out just fine. If it actually ever uploaded my screenshots. 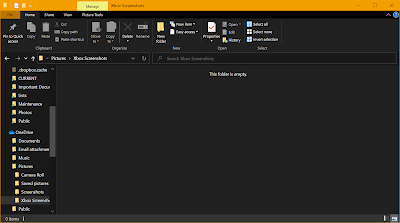 Did I mention the several seconds of stuttering lag the console makes whenever I take a screenshot? If the budget mobile phone that is the Switch can handle this without a fuss I really think the Xbox One S should do better. Maybe it's just certain games that cause it to lag out, but surely taking a screenshot can't be that taxing to the entire system.

You would think a software company like Microsoft would have had the ability to do something as basic as screenshotting and then sending those screenshots somewhere useful. Maybe if they weren't committed to changing the Xbox's home screen every two weeks they could get some of the basic features working better.

UPDATE: But alas, I have done it. Despite Microsoft's best efforts I have managed to download my own screenshots. The key is the Xbox Activity Feed that I can access via my browser. While the website won't let me right-click my own screenshots, I can use Firefox's built in 'Page Info' feature to scrape all the media off a page into a list of URLs. From there, I can pick out my screenshots from the various HTML flotsam, copy their URL into another tab, and then right-click and save them to my screenshots folder. Of course, it saves the screenshots in some obscure photo format that I then need to manually convert to .png. Jokes on you Microsoft, I'll turn your console's disaster of a UI into a serviceable piece of software yet.

Anyhow, on to the actual game.

I had somewhat played Phantasy Star Online back in the halcyon days of the Dreamcast. I say somewhat, because, as my friends enjoyed playing with one another on their broadband connections, I was stuck playing the single player version because of my 28k modem connection. PSO as single player is not a particularly thrilling experience. Take the controls of the first 20 levels of EQ1, combine them with the cramped, linear maps of the early 2000s and then repeat the exact same process for an interminable grind.

So I walk into PSO2 with more of a meta-nostalgia. I like the Phantasy Star aesthetic as a whole. It's a mix of high fantasy and sci-fi that is probably super common in the MMO space, but not one I experience all that often. 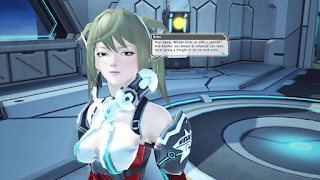 Graphics wise there isn't much to get excited over. The game is originally from 2012 and it looks like it. Some scenes look like they've been redone with contemporary anti-aliasing, others very much do not. Perhaps things would come together a bit nicer if I owned a Xbox One X, but that's not a purchase I'm going to make this late in the console cycle.

The first hour or two of gameplay are exactly as I always envisioned it. Lock on to targets with 'Lb". 'X' button for normal attack and 'Y' button for a power attack. Try to time your attacks when you see a red circle around your character to do higher damage. Dodge or block with 'Rb'. You can change the attacks available to you mid-combat but changing your 'palette' to a different set of two attacks, or by switching to a different weapon and getting another set of two attacks. It sorta works like the Guild Wars 2 combat system, but much less robust. 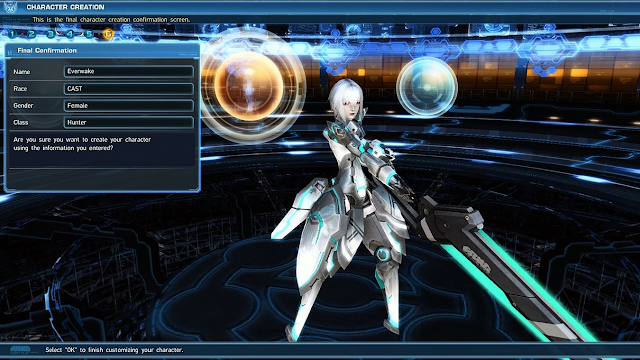 Playing an MMO on a controller still feels limiting to me. The game itself is obviously designed with a controller in mind, so the gameplay feels perfectly fine. But there is a zero chance I ever chat with somebody using the software keyboard. It's just too cumbersome. If I stick with PSO2 I'll see if I can connect a Bluetooth keyboard to the Xbox One. 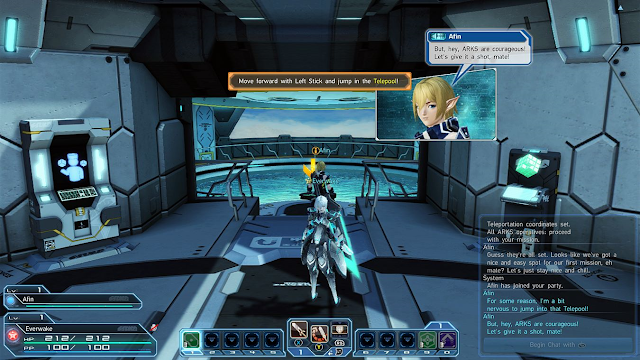 The story is some hand-wavy nonsense. We are a member of a military/expeditionary force called the ARKs. We go to some planet, the universe's bad guys are also there. we beat them up, we return, a vague cut scene alluding to us being a chosen one, yadda yadda. 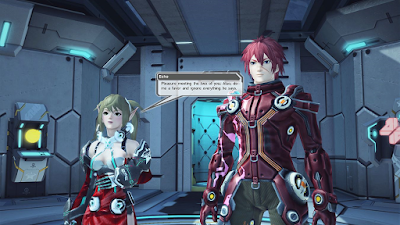 It's nothing I wasn't expecting. It's an iteration of PSO1 and doesn't seem to be trying much harder than that. Which is fine, I wasn't deluged with 8 years of added gameplay features and events on my first log in. It's a gussied up button masher in the skeleton of an MMO and that has it's place.

Not sure if I'll log in again. It does require an Xbox Live Gold subscription which is a hard sell when I don't play other multiplayer games on my Xbox. But maybe Microsoft can throw some money Sega's way and also get this as part of the PC version of Xbox Game Pass. That's would be a great deal.
Posted by Everwake at 9:43 AM