It's nostalgia week at the EverFortress. This was not a planned event but more of a welcome surprise. I'm working through both Shenmue and my small PS1 collection at the moment, but something more exciting arrived via mail. 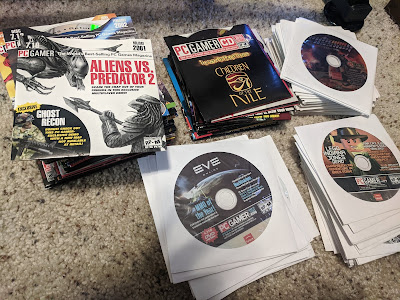 123 PC Gamer demo discs from June 2002 to September 2011. There's a couple extra discs in there as well, plus some non-PC Gamer discs I'll get to at a later date. On the surface, demo discs aren't generally that interesting. But they do make for a great time capsule of what was cool and interesting at the time, something I think we often don't remember as well as we think we do.

Now, I would have loved to get my hands on discs from the 90s. Not only is that more in line with what my nostalgia pines for, but the discs used to be games in and of themselves. In the 2000s, the demo discs came with a Flash launcher that really just doubled as a fancy way to get to the files on the disc themselves. The launcher doesn't work on modern machines more often than not, so I end up using Windows Explorer to get to the good bits anyhow. In the 90s the disc game were straight up mini-Adventure games, requiring you to play through some small amount of gameplay to get to some of the content on the disc, plus some Easter Eggs if you clicked around long enough. These gameplay bits usually had a surprising amount of FMV work, and usually featured the magazine's mascot, Coconut Monkey.

The batch of games also came with two slightly earlier discs than the June 2002 to September 2011 span: Holiday 2001 and February 2002. Since our current month sucks, let's focus on a December in 2001. Let's pop the first disc in. 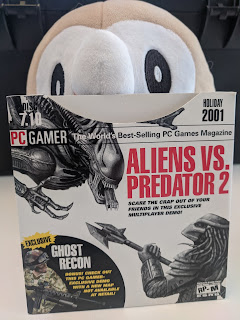 I mentioned that the launcher aspect of the demo disc launcher doesn't work, but surprisingly it still loads no problem. I had to go find my USB-connected disc drive out of the tech closet. Lord of the Rings Online was in there, I have no idea why. The .exe autoruns with no issue on Windows 10 so props to Microsoft for keeping that seamless. Take that in contrast to Apple who just killed 32-bit programs on their OS recently.


Anyhow, let's take a look at what's actually on the disc. 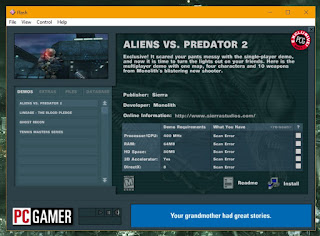 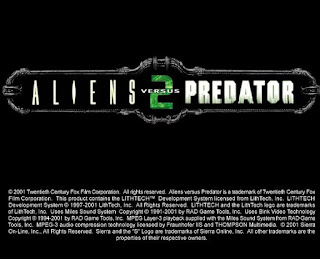 Well here's a logo that brings back some Nostalgic memories: 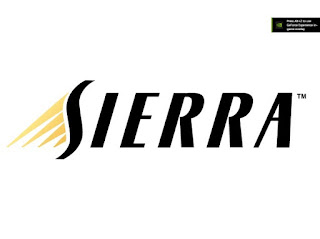 You may be as shocked as I am to learn that I couldn't find a single active server. In fact, just clicking on the menu item to launch a search for servers freezes the whole game. Maybe I was a bit premature with my praise on compatibility.

What does work is LAN play. Unfortunately, Mrs. Everwake, my video game lab monkey partner and love of my life, is leaving for a work trip so I'm stuck blowing myself up with grenades. 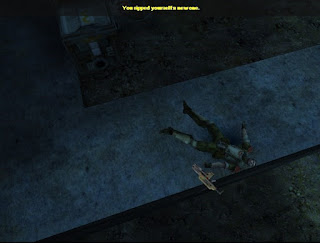 It does have that lovely early 2000s FPS vibe: dark, gritty, sci-fi, and industrial. I feel nostalgic for it now but I remember being a bit tired of the sameness back in the day. 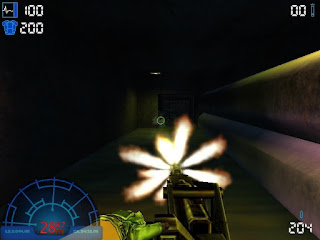 I remember playing through Alien vs. Predator (1999) back in the day, but only the single player. I don't remember anything about this particular release; in fact, I usually forget about this series all together. But there always seems to be a new release coming out and the list of games in the series on Wikipedia seems to agree with me. 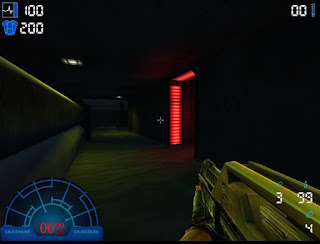 Either way, if plays anything like the other games in the series, multiplayer is asymmetric with marines being week but having numbers, radars, and stealth detection to try and kill both the Aliens and the Predator. I have to presume their is no DRM on the demo version of this game, so maybe I can talk some friends into playing a couple rounds with me later in the week. 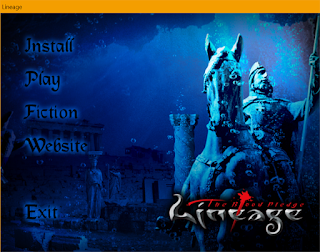 Lineage shut down back in 2011 so obviously I'm not expecting this game to work, but it's fun sometimes to see just how far into the setup process I can go. For those not in the know, Lineage was an MMO Diablo-like that seemed super popular in South Korea but maybe less so in America. Syp from MassivelyOP has a Game Archaeologist article on it for full details.


Nothing much to see here. The game installs but then tries to update immediately.


The 'Fiction" button disappointingly is just a hyperlink to a long gone website that redirects to NCSoft's home page. Shame.

Ghost Recon
So during installation, the Install Wizard offered to download the Ubi.com launcher, which I presume was an Ubisoft launcher that predated UPlay. It wouldn't let me sign for an account so I have no way of getting past the log in screen with it.

Ghost Recon is one of those games that I think I've played. It's a franchise that is both ubiquitous and generic at the same time. There is always a Ghost Recon game, but I couldn't for the life of me tell you what the current one is called.

For some reason I couldn't get my screenshot software to work with the demo. Also the game sucks. It's basically Rainbow Six: realistic third-person shooting game where getting shot once pretty much means you're dead. You control a team and focus more on strategy and tactics rather than gibbing your opponent. I like the formula in Rainbow Six, where you are typically breaching small interior spaces and the game plays out more like a puzzle game. Ghost Recon tends to focus on large outdoor spaces where you need to discern the brown pixel of a terrorist from the slightly browner pixel of the distant hill or you die immediately. Pass.

Tennis Masters Series
I have never heard of this game in all my life. Also, the demo is apparently limited to 15 days or 20 total starts, which is a restriction I don't ever remember on a game demo before. Considering your limited to one game type, on one surface, with the same two people, hardly seems necessary.

But yeah its tennis. You move with the arrow keys and swing with ... 'I'. I don't know why they picked that key but okay. It's fine, it's not better than, say, Virtua Tennis, but maybe this was the best tennis game available on PC at the time. Who knows, and frankly, who cares.


That's all for the demos, but there's a bunch of other weird stuff on here.


700 hours of Earthlink
An American ISP that is apparently still alive and well, although I have no idea what parts of the country they actually service. I also think they mostly do dial-up modem connections. Getting my Dreamcast online would actually be easier done with a dial-up connection, I wonder if I can still redeem this offer.

No combination of comparability tweaking will get me pass this prompt. Alas, I am not administrator enough to join the Earthlink ranks. 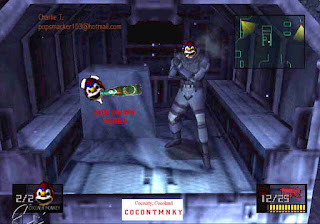 I suspect they simply uploaded anything that was submitted. I don't remember how easy to use Photoshop was back in 2001, but I suspect it could create work a little better than this.

GameSpy
Now this feels properly nostalgic. The GameSpy software which mostly acted as convenient way to connect players online through supported games. Something we expect our launchers to do fairly seamlessly now.

Between GameSpy and the Ubi.com launcher, I'm beginning to think there was always a glut of launchers that nobody asked for as various players in the industry attempted to make themselves the "platform" for PC gaming. Time is a flat circle.

It takes a bit of setup but the program does run. 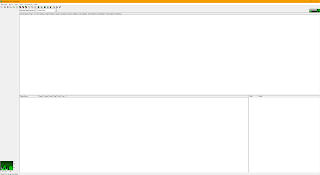 Of course, GameSpy as a service was shut down in 2014 and any game that relied on it for multiplayer stopped working. Some games got ported over to other matchmaking tools (like Steam) but most did not. The screenshot above is the server browser for Half-Life. I remember specifically using the GameSpy server browser for Battlefield 2, and when it was taken offline it became a huge deal. You can still play BF2 by manually putting in IP addresses of the handful of servers that still exist, but it's not as intuitive as GameSpy was.

Along with Ventrillo and XFire, I keep executables of GameSpy on an external hard drive and often reinstall them on new computers. I don't know why. Probably because I'm secretly 800 years old and unable to let go of a time when I actually had a social life.

Wallpapers
Although I use Wallpaper Engine for my desktop decorating needs, I'm pretty tempted to grab the lot of wallpapers from these demo discs put them in a slideshow. I've been toying with the idea of figuring out how to hook up an old 4:3 monitor I have to my modern computer, and maybe this is the reason that finally convinces me to do that. I've put all the wallpapers from this disc at the end of the post. Keep in mind that they are in 1024 x 768 resolution. I've not actually heard of some of these games, like Duality, Kyrne, or Midgard.

WinZip
I don't know why there is a trial version of WinZip here, but okay.

WinAmp Skin
This is a PC Gamer WinAmp skin. Remember how I said I was secretly 800 years old? I still use WinAmp. Granted, not as much as I use YouTube Music or Spotify, but I do still genuinely use it to play my ripped CDs and the occasional Internet Radio binge.

The skin only half works, the extended library panel, which I suspect was included in a later release of WinAmp, still uses my default skin. Also, the PC Gamer skin is ugly anyhow, even adjusting for a turn of the millenia aesthetic. Also, please ignore the Windows XP background, because I am, again, 800 years old.

It doesn't get much more 2001 than that. I distinctly remember playing the Max Payne Matrix Lobby mod on a friend's PC back in junior high. Like the titles says, it recreates the lobby scene from the Matrix movie. Since Max Payne was all about slow-motion 'bullet time' shootouts in kinda sorta worked. This was considered a peak of the modding scene if I remember correctly. Unfortunately, my copy of Max Payne is the PS2 version, so I have no way of trying this out at the moment.

Patches
There's also a bunch of patches for the likes of Half-Life, Warcraft 3, etc. Nothing you couldn't get off the official websites (or FileFront). But for my 28k modem self, the only way I had to patch my games was either these demo discs or asking my more broadband-fortune friends to burn me a disc with the patch on it.

In Conclusion
I have no plans on going this far in detail on every disc; it wouldn't be fun and nobody wants to read that. But I do enjoy the nostalgic frission I'm getting going through these things. I might collect some of the more interesting bits I find into a weekly best-of post.

If anyone wants any of the files these demo discs contain, just let me know. I'm certain a lot of this is already on the Internet somewhere but I doubt all of it is. I was also surprised to find that the CDs themselves were not uploaded to a place like archive.org, so perhaps I should use this Corona virus enforced alone time for some historical preservation work.