Animal Crossing is an MMO

How long does it take a self-proclaimed introvert to lose their mind in self-quarantine?

While Everdog and the Mrs. are taking naps, I'm running circles into the living room carpet. I may be an introvert, but I do have an agreed upon truce with the sun. I like walking outdoors. It's about the only thing I like to do outdoors. Normally that wouldn't be a problem even in our current Corona'd state: I live in a rural area where there's nobody walking around outside even in safer times.

The weather, however, has not been cooperating. We are in the Minnesota 'Fool's Spring' where after a brief respite from winter we have once again plunged backed into the sub zero (-18 C) temperatures. Combine that with another generous layering of snow and a jaunty hike has been out of the question.

(This hasn't stopped everyone in our community. We woke up this morning to find our driveway plowed of snow. We suspect it was one of our elderly neighbors. How he managed to do this without us hearing the roar of his mower is beyond either of us. That said, I obviously want to thank him, but I don't have his phone number, and with the virus' affect on the elderly I'm hesitant to meet him directly. I've settled on handwriting a thank you note and mailing it to him. Hopefully, we'll meet up after this is all done for a pint.)

I'm slowly but surely playing through EQ2 in the background, but my desire to actual talk about it has been negligible. It has the gameplay that I'm looking forward to right now, but there isn't much to say about the 15 year old content that I'm playing through right now. I'm on the final disc of Shenmue as well. But that game is even older than EQ2.

The release of Animal Crossing has obviously come at a quite fortuitous time. As far as I'm concerned this particular iteration of AC is an MMO. It's missing some standard features obviously: the closest thing to combat is whacking your villagers with a bug net.  If you think about it, it sort of plays like a survival-crafting game, which I consider a spiritual successor to the MMO genre. It's admittedly light on the 'survival' aspect of it (although getting stung twice by bees will respawn you back at your house). But the crafting, decorating, exploring, trading, and social aspects are all here. 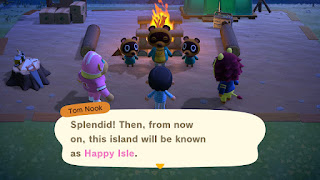 You could argue that these features were always present in the Animal Crossing games. But the addition of quests/objectives/whatever-you-want-to-call-its in the form of Nook Miles brings the franchise's focus into sharp relief. We are doing chores to grind multiple forms of currency, gathering materials to unlock end game features, running errands for clothing, and earning reputation among multiple NPCs. We are a 40-man raid away from being World of Warcraft.

But is AC a proper MMO? More specifically, is it massively multiplayer? At first glance no. But there's real economic benefits to keeping a huge friend's list. Selling each island's unique fruit is a huge boon for cash. Furniture and clothing is randomized each day for each player. Additionally, I'm already seeing communities pop up again to take advantage of the game's clothing and furniture editors. The decorating community in AC is every bit as real as the one in EQ2. 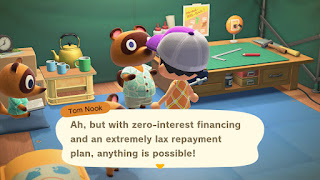 Even if most player's don't max out their Switch's friend list with fruit trading pals, it's still there for the hardcore to take advantage of. And that's the reality of most MMOs these days. Most players are going to play solo and casually. Occasionally, they take advantage of social features to play with their friends, or form a temporary alliance with strangers. It's not a good way to meet groups of people, but most MMOs at this point haven't been good at that for a long while now.

If nothing else, it's scratching that MMO itch for me now. I'm slowly grinding away with my gathering, crafting, and 'questing' to slowly unlock more and more features. It puts the good stuff in my brain during a time when I'm trying to keep bad stuff from my lungs. It's taken the parts I like about MMOs and hasn't burdened itself with bits that don't suit it.

Although I wouldn't say no to some open world Animal Crossing PvP. 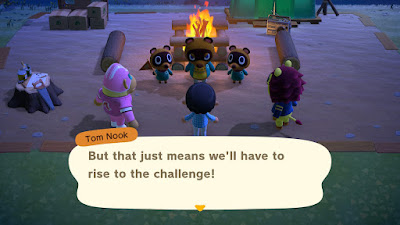