A work project from hell combined with actual socializing have conspired to keep me from playing video games.

I've never cared for this being an adult thing.

The work project itself wasn't really the problem. Unclear expectations from the client led to a lot of staring at the screen and wondering what in the hell I should be doing.

Thankfully I had the good sense to charge by the hour on this one.

Last weekend was also Valentine's Day. Which is also Mrs. Everwake's birthday. And the anniversary of our first date. And her work's rescheduled Christmas party.

I did find the time to get some gaming in. More particularly I bought a dedicated frame for my racing wheel and pedals. 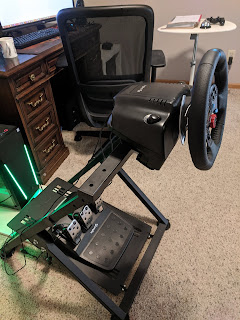 The racing wheel itself works on a clamp system, and the only piece of furniture I had in the house that fit with these clamps was the wife's desk for her computer. Obnoxiously, she insists on using her computer so playing Gran Turismo required the setting up of the hardware every single time.

The rig alleviates the need for this. Now I just have to slide it's bulk slightly to the right to line up with my computer's monitors and away we go. It's pretty much a perfect solution. Except it seems to collect an extraordinary amount of dog hair. I don't know why.

As a result, I did Gran Turismo Sport's version of their "license tests". In the series, these tests are a series of challenges that teach one the basics of how to drive a fast car. They always start with obnoxiously easy tests such as accelerating in a straight line and then breaking. But by the end they are usually the hardest challenges I've ever experienced in a video game.

GT Sport's version of these license tests are far from the hair pulling difficulty of games past. Since this was a niche release meant to focus on online racing I can sort of see why it wasn't made a priority. But really, if more people had to go through a significant challenge on how to actually drive their car, then maybe online racing wouldn't be the clown show it currently is.

Either way, the last test still took about 15 tries for me successfully gold medal, but the deed was done. 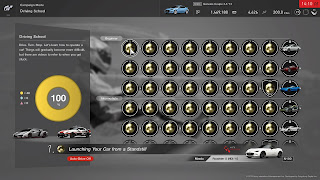 The achievement says that 9.7% of players have got all gold on these tests. I thought that number seemed high but it makes sense. It is easier than games past. Additionally, this game was not well received on release, and was probably only bought by diehards. I don't think a game that featured almost exclusively online competitive racing on release attracted a lot of the mainstream crowd, especially since "realistic" racing games are a dime a dozen these days.

I haven't made it very far in my Everquest journeys. Working from home means that procrastination is my number one enemy, and MMOs are just too good a vector for that.

I did knock out the Enchanted Lands, an original zone that only covers the 5 levels, 30-35. I think it's better for that however. Previous zones were way too reliant on grinding placeholder mobs and stupid amounts of traveling to pad out game time. The Enchanted Lands isn't too much smaller than the Commonlands and Antonica, but is able to rely a bit more on actual gameplay because of it. It does feel like maybe the zone was simply rushed at released. Most of the questing is concentrated to about half the zones. The northern half is barely used at all. It's fully populated with mobs but there aren't many quests. I wonder what led to that.

This is the first weekend in a while in which I can play games guilt free. It's also shaping up to be one of the first weekends with a wind chill above 'doesn't hurt to go outside'. I might dig out a little spot on the back porch and play Switch outside just because I can.
Posted by Everwake at 12:31 PM