I'm in an experimental mood today, so I decided to sort through the various tags on Steam to look at what's come out the last month or so for MMOs.

Mirage Online Classic implies some sort of lineage that I am wholly unfamiliar with. If there is a Mirage Online Current I can't find it in a Google search. In fact, I'm having difficulty finding much of anything about it with a Google search. There's a very basic official website, a Youtube with a couple of short gameplay videos, and not much else. It seems to be a HTML5 game as I can play it either in a browser or in the standalone client downloaded from Steam. It must also be a mobile game as you can toggle to mobile controls in the game itself.

Character creation is bare bones at this point. 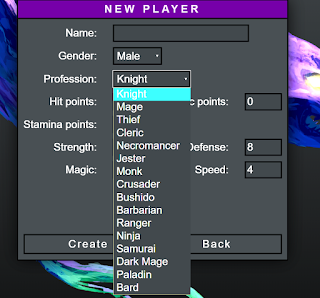 You get to pick a name, a gender, and a drop down list of Professions. The professions seem to have access to different spells, according to this chart on the official website. As far as I know, space bar is the only way to attack. There is an inventory slot for spells so I presume each class can pick up appropriate spell books. In the first hour or so of playing I didn't find any.

The game starts of linearly enough. It plays from a top-down perspective and control uses the traditional WASD keys. Spacebar attacks and E picks up items. Shift is a toggle for running. I don't believe there is anything to the controls other than that. 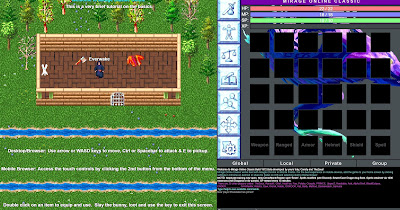 The game gives you some starter items, asks you to kill a bunny and then teleports you off to the first town. A message in your chatbox sends you to the local well, where you navigate a simple maze to the end. You kill rats along the way that don't fight back and slowly accumulate gold and XP. The end of the maze gives you a full set of starter gear and dumps you to the beginning of the next quest. 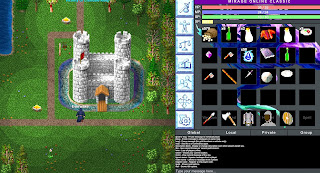 I chose to navigate the overworld a bit and got some King's Quest vibes from the art style. I saw the idling of what could have been other players or NPCs, I'm not sure. The chat log showed about 25 players on when I logged in. Chat was busy enough. Exploring done, I descended into the sewers to take out a sewer dragon. It was slightly more complicated maze, this time with snakes and a bad guy who was a carbon copy of my character. Finally we made it to the sewer dragon. 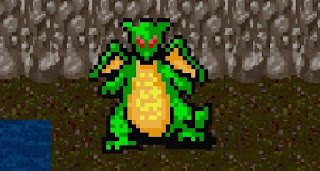 The first time I faced him I died. In hindsight, tanking and spanking a dragon as a mage was a poor choice. On my second attempt I realized that kiting was possible in this game. The floor would occasionally give off a puff of smoke, and I needed to move to avoid the incoming flames. The dragon eventually went down and I was immediately teleported to a room in the overworld with bags of gold and health potions.

Unfortunately, I'm now stuck. Whereas the two previous quests were simply handed to me on screen or in my chat log, what I need to do from here on out is obscured. Supposedly, on certain maps, a UI button will light up to let me know there is a quest in the area. But that button never lit up. Chat seemed just as confused as I was. The official website gives a list of quests so I tried to follow that. I found the next 'boss' (after confusingly needing to teleport into some boxes) and tried to manually complete the nonexistent quest anyhow. Unfortunately, most of my attacks missed and the boss couldn't do enough damage to me when I'm kiting to outpace my innate healing. I got bored and closed the game.

The game isn't actually listed as Early Access on Steam, although the official website calls each update a beta release. It's fun to get in on the ground floor of a game sometimes, but it seems like I'm about to be asked to do quite a bit of grinding right from the get go. After dealing with Ultima Online last month, I'm not sure if I'm really down for that.

I do love the aesthetic and simplicity though. I reminds me of the simple flash and downloadable games I would gravitate to in my teenage years because of our tepid 28k modem connection. The game makes me want to give Realm of the Mad God a spin again. I'm not sure I'll give this one too much more play for the moment. But it's free to play and takes up virtually no hard drive space. No reason not to keep an eye on it.
Posted by Everwake at 5:17 PM