I've not had a blog post in a while, apparently the holidays had discombobulated me more than I expected. It also affected my dog a fair bit as well.

But since getting back home,  I've found myself in a bit of gaming bliss. Normally around this time I begin to get burned out on video games. I've feasted on the glut of Black Friday and Steam sales and start looking towards other hobbies. But I've been playing a ridiculous amount of Everquest 2 lately.

Sadly, I've dropped the Let's Play series I was blogging because frankly it was too much work. Getting linked on Massively was cool but the constant start and stop of taking screenshots and translating the in-game story line into something bloggable was becoming a drag.

I'm playing EQ2 freely now and enjoying myself. Dusting off my main and getting her ready for the recently released expansion is simply too daunting. I've done a small bit of the last several expansions and literally don't know where to pick things back up again. The new expansion seems to have perquisite quests from all these different quest lines and putting it all together is more paperwork than I prefer in my games. Crafting wise I think I'm current up through Terrors of Thalumbra? That was the last expansion I actually remember buying but who knows. Sometimes it would be nice to have a little direction in Norrath.

But that's besides the point, I'm enjoying playing my lowbie Necromancer. I'm currently killing my way through the Commonlands, having completed the Freeport Outlying areas that I've never done before. I've also been decorating up the Isle of Refuge prestige house I got as a Veteran's Reward. Placing objects in an actual zone is a lot of fun; it almost feels like I breaking something or I'm playing with the same tools the dev team gets. Dungeon Maker or whatever it's called also felt a lot like that, but that feature has been functionally dead for some time now.

Sometimes I get into a gaming rut because I'm not really playing the correct game for what mood I'm in. EQ2 is great for a more relaxed, beginning or end of the day kind of thing. But I also want a faster paced game to pour some excess energy into. Since I have more money than sense I decided against simply playing any one of the many action games in my Steam backlog, and bought a racing wheel instead. 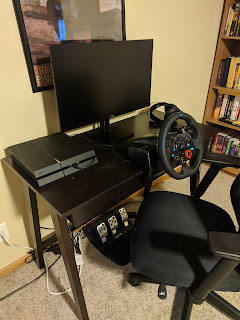 I struggled to find a desk that would work with the clamp system the wheel uses to stabilize itself. We did have one desk that worked. Unfortunately, it's my wife's desk for her desktop computer, so this is going to have to be a temporary setup. I'm playing Project Cars 2 right now and having a lot of fun.

What appeals to me in racing games is really the same thing that appeals to me in MMOs: small, constant, and measurable increases in ability. While just about every game has borrowed progression systems from RPGs these days, I'm talking about the core gameplay loop. The thing that drives me in a good MMO is getting just a little bit better at playing a more and more capable character as I go through content that gradually challenges my abilities. That's exactly the same gameplay loop as a racing sim. Starting with low power, easy handing cars and shaving seconds off of lap times, and then graduating to higher power and harder to control cars and shaving tenths of a second off of lap times. If only we could combine these two genres! My money to whomever can make me a wizard in a go-kart.

While a lot of games theoretically feature that same gameplay loop, I feel many games obfuscate it with a bunch of stuff I don't super care about. Cut scenes, open world markers, overly long tutorials, etc. I just want to do a thing until I'm good at it, and then do another slightly harder thing until I'm good at it, and so on. Every game used to do this, if for no other reason than there wasn't enough physical room on the cartridge or CD to do anything else. I don't want to sound like a boomer about it, there are times when I want fluff in my games. But what I want is what I want, and EQ2 and racing sims are my current preferred flavor of that right now.