December 10, 2019
This is Part 3 of my playthrough of Everquest II. I encourage you to read the previous entries before this one: Part 1 | Part 2

With the Tunarians routed, there isn't all that much more to do on the Isle of Refuge. We finished collecting 5 feathers and 5 sea shells and turned them in to a crazed collector woman for a pair of necklaces. I assume I'm getting ripped off here, but each of the items this woman gave me has more stats than the rest of my gear combined so we will make do.

We helped Bobbie Whirlwidget research submarines. We finished up a research assignment gone wrong for Trainer Sythor the All-Seeing. His poor research assistant was eaten by a large fish. He immediately went to work finding a new one. You have to love when fiction mirrors real life! And then finally we helped a Priestess with a very love/hate relationship with her job. 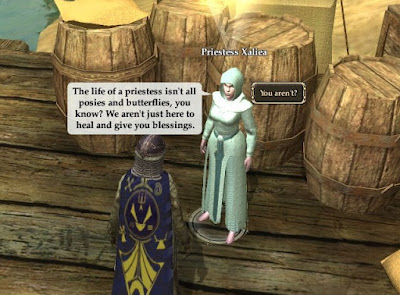 I spent a decade as a Discipline Priest in another life; I feel you girl.

But with that, sadly, our time with the Isle has come to the end. It was a nice little isle, filled with horrible, incompetent people. Maybe we can do something about that one day. Let's take a visit to our old friend Captain Varlos and get to Freeport. 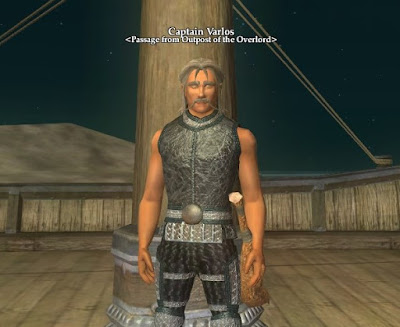 All of our sacrifices and hard work have brought us here. 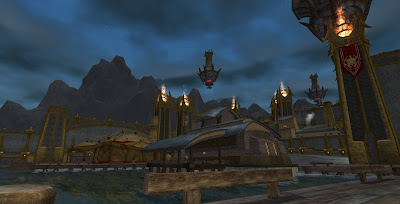 Alright it's a bit gloomy, but I lived in the US Midwest all my life so I'm used to the permacloud. It's all a bit overwhelming. The guards are surprisingly helpful for an "evil" city. Certainly much nicer than the guards in the real world. Unfortunately, a reality has set in. We are broke. Routing an entire enemy force and conquering an island for our Overlord doesn't pay like it used to.

Unable to find a decent place to stay, we need to figure out where we can at least get shelter. Asking around town gives us some horrible options. But horrible options are apparently the only options we have. 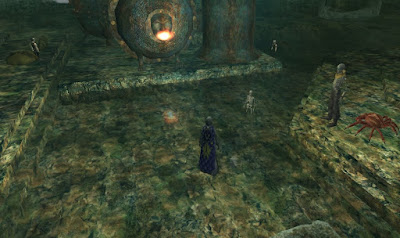 Okay, look. It's definitely a fixer-upper. It smells like raw sewage, looks like raw sewage, and is raw sewage. There are oozes, crabs, snakes, and gnomes living down here. It's not ideal, but it's warm and still cleaner than where I lived back in college.

Let's do our best and struggle our way through the night. The denizens all seem weak enough that we don't need to fight most of them. One particularly weak creature, insistently calling herself a ratonga, can apparently talk. 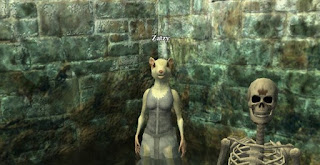 Zatzy claims that she is the victim of a Darkblade death squad. I don't know who the Darkblades are or why they want to kill ratmen, but she claims she can pay me to take the fight to the brigands. They stole a trinket from her and would like it back. I would like the finder's fee so we work out a deal. I probably wasn't going to get much sleep down here anyhow, might as well make ourselves useful.

We saw some shady, murderous types on our way in so let's dispose of them rightly. After killing so many Darkblades that we had to wait for more to show up, we finally find the described trinket on a poor elves' remains. We hike it back to Zatzy.

And...she betrays us. Honestly, we need to stop taking quests from strangers we find in sewers. She attempts to kill us and fails, as we killed her first. She let slip in her hubris that the trinket is really a key to the Darkblade hang out. A hangout might have treasure, or more importantly, a bed to finally sleep in! 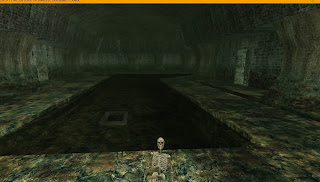 But no, there are no beds in the Darkblade Den of Assassins, only assassins. If only it was the Darkblade Den of Decent Nights Sleep! We killed some assassins, and then killed two head honchos: Zaynis and Sinyaz V'rix. What a power couple. They give us the toughest fight we've had yet, and drop the gear to match. Unfortunately, we can't wear any of it. 80% of the gear that has dropped so far has been 'All Fighters, All Priest, All Scouts'. I don't know if this exceptionally bad luck, or exceptionally bad design by the Gods, but it's quite annoying.

Alright, this place sucks. I'm getting out of here.