Feeling the hankering for a proper MMO again, I've decided to get back into Everquest 2. Rolling a new character is currently more appealing to me than dusting off my level 100 Wizard. I feel like doing something a little different with this post. I'm doing this bit as a travelogue of my character's adventures. I think this is will not only be fun to write (and hopefully to read), but also enjoyable to look back upon years from now. Also, it might actually help me keep track of some of the story, as it's been fifteen years and I still know fuck all of what's happening in this game. 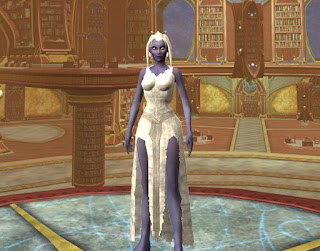 This time around my character is going to be a necromancer. Mostly because I've never played a Necromancer typed character in any video game other than Diablo 3 (and that one doesn't really count). I also choose to be a Dark Elf. There really are two reasons. I don't know much about fantasy tropes, but I'm to understand Elves are generally dicks. I figure I might as well be the dickiest of the bunch. Secondly, my goal is to play an Evil character so I eventually get to the Commonlands. This is important, because as all gods-fearing Norrathians know, the Commonlands background theme slaps.


It's a damn jaunty tune.


Our hotbars blessedly only have four abilities on it. This is in contrast to the 2,378 buttons on my Wizard's hotbars. We have a hearthstone, a DoT, a nuke, and the ability to summon a skeleton. Combine this with a skeleton butler cosmetic from /claim and we've got the beginning of a happy evil family.


Greeting our savior, the good Captain Varlos, we are immediately put to work. First we help a chap find his hat in some boxes. This is why I always sharpie the contents of boxes when I move house, it really reduces this stress of this sort of thing. We also find a small bag and a threadbare tunic. For some reason we steal these things from the people who just saved our life. Role playing as evil begins quick and early in Everquest II.

Our now hooded chap gives us a commemorative coin for our hard work. I presume these are the same bits and bobs I find being advertised on cable TV late at night. We then immediately sell this charm for next to nothing and buy a piece of the moon. I can't help but thinking bits of the moon should be more valuable. I understand that the moon exploded, and a good deal of it landed on Norrath, but I don't remember huge piles of moon in Antonica or anything. It feels like a shard of Luclin should be worth more than the commemorative coin that was destined to sit in the bottom of a closet forever.


(Tangent: In college our house had a minor mouse problem. I had a few traps set in my bedroom that mostly worked. But one mouse was too smart to be caught. Unfortunately, said mouse had both eaten through the wires in my headphones but also gotten into my food stores. One day, while playing WoW, I heard the tell-tale scamper of the mouse behind me. Frustrated, I did the only thing I could think of, grabbing the broken leg of a table stand that sat next to my desk and took a swing. I got him. I did not gain XP. I just felt incredibly gross.)

Anyhow, after blasting two Mickeys we get attacked by a drakota, which I believe is a dragon going through puberty. 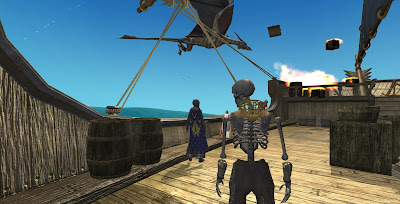 Having been denied access to the car by his father, our pimply dragon sets the bow of the boat on fire and sets a goblin free. It's never explained why a goblin was imprisoned on the front of the ship. Personally, I would be more concerned about a full-grown necromancer than a goblin but sailors are a quirky bunch. The dragon runs off (explaining the we are not it's real dad), the goblin is murdered, and we finish our Far Journey. Onto the Isle of Refuge.
Posted by Everwake at 6:31 PM