Where Have All the Good MMO Gone? And Where Are All The MUDS?

I really enjoyed writing my previous blog post about defunct MMOs of years past. Not that I'm happy so many games have shut up shop but rather it brought me back to that time when new, weird, niche, and AAA MMOs were reliably coming out. This is ostensibly a MMO blog but in the second half of this year there just haven't been any news or releases that excite me. Classic Wow had me feeling great up until the point that Blizzard decided to poop in it's own hand. ArcheAge never clicked with me.

At minimum we are blessed with some workhorse titles that are all seeing updates. The brothers Everquest are still churning. I see Knights of the Old Republic got a new update. Guild Wars 2 seems to be somewhat disappointing it's fans but that's certainly better than nothing at all.

So I guess I'm at an impasse as to what exactly to play.  EverQuest 2 sounds promising with all the Anniversary stuff going around. But logging into my main greets me with this: 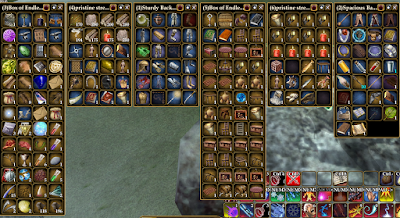 Combine that with several hotbars filled with spells that I don't remember the purpose of and I feel it's an uphill battle just to get back to the content. I'm tempted to just start a new character and use this blog as a nice convenient journal so I don't lose the knowledge of how to play that particular class or where exactly I left out.

But at that point I might as well try one of the many MMOs that I've not spent a lot of time with. Half of the MMOs on that PC Gamer article are games that I never tried. Some, like Wildstar, I really regret not giving a chance when I had the ability to.

So really I'm staring at the age old backlog problem. There's too much to play and I'm overwhelmed by choice. This is not the first time I've complained about this "problem" on this blog.

Perhaps will be a night of reorganization. I have two different hard drives and a SSD that are filled to the brim with installed games but very few of them are actually getting played. Perhaps it's time to make my ISP earn it's month's pay and download a bunch of MMOs, get them updated, sign into all of the accounts, and clear out bag space. If I remove all the friction from actually playing the game, maybe I'll spend less time sitting in my chair being "bored".