Ultima Online - A Tale of One MMO

Ultima Online is the best of it's time, and it's the worst of it's time, it was the hallmark of lasting game design, it was the feature of design foolishness, it's a game that looks like Diablo 1, it's a game that can actually be played at 4K, it's stat system is inscrutable, its quest system is straightforward, it's appeal as a game is obvious, it's appeal as a game in 2019 is questionable - in short, Ultima Online was so far like present MMOs, that some of its noisiest authorities insisted on its being received, for good or for evil, in the superlative degree of comparison only.

It's almost impossible to come at UO in a vacuum.

At it's heart, its a game where one slowly clicks on their screen while watching numbers slowly go up. This inherently describes just about every RPG ever made. But the spice is always in the details of how one surrounds that formula, and Ultima Online (at least from the several hours I've now put into it) is as bland as Minnesota cooking. Combat is clicking on an enemy. Several hours in, hotbar abilities are present, but seem unusable and unnecessary. The story was a three paragraph blurb during character creation that I've already forgotten. Character creation and customization (so far) was picking from one of several templates that we've all seen a hundred time before. Also, his beard is crooked.

UO's playability today suffers from everything that isn't in it's control. The neatness of an online open world is obviously no longer a novel feature. The Ultima brand has dissipated into nearly nothing. The many, many skills one must level for their character feels onerous instead of freeing. (Leveling parrying isn't fun. And no game will ever make it so.)

The developer's over the years have clearly worked hard to keep the game up to date though. The UI feels archaic but is perfectly usable after 5 minutes of getting familiar with everything. The game plays well with a 4K monitor and is perfectly usable with a second monitor (a feat that ArcheAge and Everquest 2 could not do). The graphics are obviously not great, but they've been updated with the enhanced client to be perfectly usable from a gameplay standpoint. 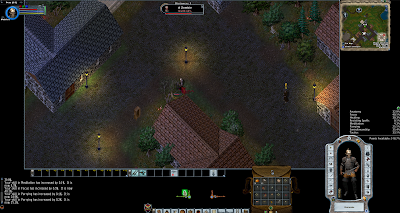 So while the base gameplay is failing to hook me, the dev team has done everything possible to actually get the game up and playable to a total newbie in 2019. It's a game about grinding (in one form or another) and technically there's very little in the way of that, other than my own desire to play something else.

But I know that there is more here. Crafting and housing for one. I also suspect that there is more charm and challenge to be had once I grind my way off this starter island. So I'm going to stick with this one. Maybe not as my main game, but as an enjoyable distraction while watching TV or a podcast.