Good News: I just got back from a trip in San Antonio, Texas and it's a beautiful city to walk through. It has a river system surrounded by walkways that rolls through the heart of the city. The landscaping and architecture is almost Disney World-esque. The food and the weather were decent enough.

Bad News: I got the flu on the plane.

Good News: Planes are loud enough that people in the cabin won't hear you violently throwing up in the plane's lavatory.

Bad News: That's probably not true, and the poor people in the backrow were just being very polite.

Good News: Being bed-stricken leaves plenty of time of for playing Dragon Quest on my Switch.

Bad News: A nasty case of the spins means I'm lucky not to just drop the Switch on my face.

Good News: I felt better on Sunday to give Bloodstained: Ritual of the Night a try on Xbox Game Pass.

I only made it an hour and a half in due to my flu-derived madness so this is not a complete review. I also have never beat Symphony of the Night, but I played through all the Game Boy Advance Castlevanias so I do believe I have a decent background in these types of games.

The first thing I noticed was just how bad the graphics are for a game that's not too overly ambitious in this department. There is a lack of anti-aliasing that very prominent here. The options menus says it uses a form of AA but it must be a very low-resource intensive version of it. 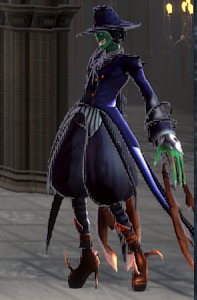 The jaggies are very prominent even when playing on my 1920x1080 monitor. Additionally, this game has a lot of clipping.

The main's character's feet seem to clip through just about most floors in the game. This has me worried about how accurate the hitboxes are for actual attacks, although my playthough hasn't shown that to be too awkward on the surface.

I think the game's overall art style looks pretty good. I was getting some gothic Trine feelings from the game.

The actual gameplay seems fine. Castlevania has always felt a little bit unresponsive to me. I tend to prefer a more Mega Man or Super Meat Boy level of tightness to character movement that Castlevania is not necessarily about. That's a preference thing, but one that tends to stick with me.

I feel that I've barely scratched the surface into any of the game's systems so far, and most of the enemy types are just copy and pastes from the Castlevania series. So I'll have more to say on this once I get further along.

Hopefully I feel better enough today to get more gametime in. Although, I'm very, very behind in housework at the moment as well. I'm also playing through Dragon Quest 1 on the Switch, but by it's nature, there's not going to be a lot to say about it until I've completed it. I also have about 800 posts in the RSS reader to catch up on.

I have a very busy day planned.
Posted by Everwake at 10:42 AM