The misery of past years of have finally passed. For now we traverse through the mists of Azeroth in style. 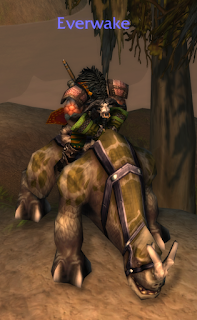 With the auction house's economy still fairly anemic, scraping together the coin for my kodo took some penny pinching, not buying the last 8 levels worth of abilities from my trainer (thank God Mortal Strike is given from the talent tree, and thus, free), and a generous 6 gold loan from Mrs. Everwake.

The extra speed has immediately seen itself useful. I was able to make the (now) quick trek to Feralas and Dustwallow Marsh to finish off the Fishing Quest. This opens up Fishing all the way to 300 skill points and returns some blessed bag space. My Blacksmithing sits at 165, lagging behind all my other professions, and desperately needs an infusion of Iron Ore to get back into shape. Normal leveling has ceased to provide enough of an ore drip to sustain profession leveling and now I need to focus on farming. A task much easier done on the back of a kodo.

In more meta news, me and my crew of 3 ended up accepting Blizzard's offer of a server transfer from Pagle to Windseeker. Assuming the census record websites are correct, Pagle heavily favors Alliance, probably on a 3:1 scale. Questing in Stranglethorne Vale was quickly becoming a problem as a member of the Horde. Blizzard is desperate to get rid of layering on its servers but its clear this is going to leave some servers a mess. Not only is questing and resource imbalances going to continue spiraling out of control, but world bosses and PVP are going to be adversely affected as well. Windseeker is definitely a smaller server but its more balanced and seems to still have plenty of population. If we can get the gates of AQ40 open and battlegrounds don't become too one-sided then I suspect Windseeker will make a fine home.

I'm starting to pull ahead of Mrs. Everwake in the leveling game, so it makes sense for me to concentrate on other projects at the moment. I'm going to get Cooking and Fishing as close to 300 as possible this week, and get the 225 First Aid quest done as well. From there, I can start leveling my Alliance mage in retail to 120 and possibly knock out out some of the first levels in the Warcraft 1 campaigns.
Posted by Everwake at 1:22 PM