TLDR: I Quit the Blizzness 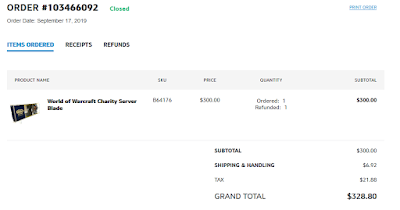 Off and on Blizzard has taken to selling some of their old servers. I've wanted one forever but never had the money went they went up for sale. There aren't very many opportunities in our hobby to own an actual physical piece of a game we love. I was pretty excited to frame this on the wall next to an old Warcraft III poster over top of my gaming PC.

Then this morning happened.

Blizzard isn't close to the top 100 most corrupt businesses in the world. In the grand scheme of things not letting their platforms be hijacked by a contractor's political message isn't "that" big of a deal. A company that's continually falling flat on their faces in the West and is desperate to find growth in China and will play by the CCP's rules in order to do so isn't new. A lot of companies do that.

It's a silly thing. Nothing Blizzard is doing is different from what western companies have been doing for the past 3 decades. But we care more about this one because Blizzard was special. It created games, worlds, and memories that we could pour ourselves into. Turns out Blizzard wasn't really worthy of that love. Or at least it became unworthy. Blizzard has always courted and received this expectation that they were special and worthy of our loyalty. A lot of us ended up treating Blizzard as an organization we respected and high hopes and expectations for.

People can have whatever opinion they want on all this, but the fact is that I just feel a little dumb. Blizzard is a big nameless, faceless organization that I put a bunch of emotional expectations into and expected it all to work out. But it doesn't work. Blizzard, or the people in charge thereof, decided that expanding their economic foothold into China is worth so much more than the freedoms and lives of a couple million people. I'm sure they wouldn't put it that way! 'In the long run these economic moves will create a better world for everyone' is a thing we've kept saying since 1997 with not much fucking proof yet.

So I ended the purchase order on a thing I've been wanting for a long time. That sucks. I uninstalled all the Blizzard games on my computer. Feels bad. I'm going to need to find a new way to keep in touch with my family now that WoW Classic is off the table. That really, really sucks. But it's all still selfish at the end of the day. None of this will bring freedom and prospecrity to the globe. It's not even going to make Blizzard rethink their position. I just don't want a reminder of the hours I poured into a company expecting anything other than what I got.

I have the memories. I have the fun I had. I have the feeling of accomplishment and all the people I've met through their games. But what I don't want is a reminder of the time I asked for more than what strangers would ever give. In the eyes of this company I'm also nameless and faceless; just another money pinata.

I want to refocus up. My bookshelves and hard drives are filled with the blood, sweat, and tears of people who worked their asses off to make a thing they really liked. I've been in a rut of playing the same things over and over again because it was familiar. I've went through a lot of life changes recently and I took refuge in the familiar. This is a perfect opportunity to change that.

I want to expand the experiences I get, whether that be in media or the dreaded metaspace. I want to focus on the game I've got in my hands more than they game I want the next patch to make it be. I want to focus more on what someone has made rather than what they should have done instead. And I want to accept that the work itself is more important than the people who made it, not because I want to accept dealing with shitty people, but because I want save that kind of investment for the people who are actually in my life.

I'll be back one day. Diablo 3 didn't magically become a bad game this morning. But this whole brouhaha was a nice reminder to be more selective on the people and groups that get to matter to me. Blizzard is a generic video game company who deserves no more loyalty than any other. And they don't deserve a place on my wall.