A Weekend Full of Water and Vacuuming

I've not had a ton of time to enjoy any gaming these past couple of days. My basement partially flooded and I'm still spending hours vacuuming water out of the carpet. The carpet is probably a lost cause and that'll be about $500 to replace and install. The joys of home ownership.


Breath of the Wild
After finishing up the Xbox 360 version of Portal I renewed my efforts in Breath of the Wild. I finished up most of the side quests in Kakariko and Hateno Village as well as nabbing most of the Korok Seeds in the adjacent areas. I've been using the fantastic interactive world map from ZeldaDungeon.net to track down all the discoverables in this game. I don't particularly enjoy aimlessly wandering around digital worlds, at least not ones as empty as the Breath of the Wild map, so being able to cut to the chase and get to the actual content in a reasonable amount of time is a blessing. Much like my Skyrim playthroughs, I'm in no particular hurry to get the main quest up and running. 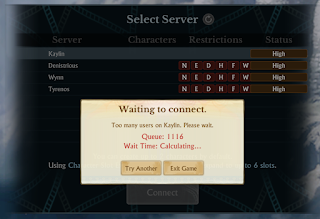 I never played any of the original so I'm curious to give this a shot. I honestly don't expect the developers/publishers of this title to behave and keep the usual microtransaction tricks at bay very long. My hope is that I'll get a couple of months out this before I get pushed out for the whales. A perfectly fine value for $25, and I might even get proven wrong.

It's my understanding that this is more a sandbox MMO than a theme park, and I can honestly say I have next to no experience with a sandbox. Hopefully this game represents this subgenre's best foot forward and I can see what I've been missing.

Minecraft
I did manage to find some time during the weekend to play a little Minecraft, although when you're spare bedroom is doing it's best swamp imitation my attention was a bit divided. Me and the wife are slowly building are humble abode. We aren't making any progress in the tech tree or whatever game system is there, we are simply building our house and the areas nearby. I've never really "decorated" in a game before, outside of emptying my bags of furniture into whatever free housing I got in Everquest 2. But this has been enjoyable. Maybe I'm just in the "nesting" part of my life. At least my Minecraft house doesn't flood. 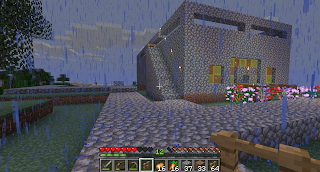 It's a pretty standard grey block of a house because at this point I don't know how to do much else and I've felt no real compulsion to look up anything fancier. Ignore the zombie near the stairs; I evicted him soon after this picture was taken. The moochers never pay any rent. 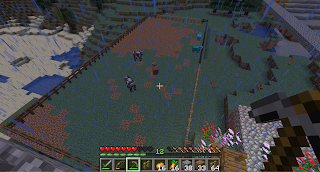 Over the course of our relationship, my and my wife have collected a number of stuffed sheep.I often buy here one when she's feeling particularly stressed out so we've gained an affinity for the creatures. Happily, Minecraft let's us have our own digital flock. Apparently, dying their wool changes their color permanently. Video game logic. 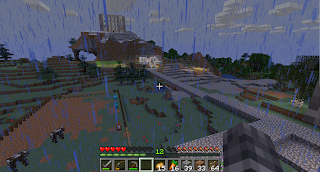 I find navigating small elevation changes in Minecraft to be surprisingly clunky. I suppose that's the nature of game with very few curves in it. Much like the Romans, I enjoy building roads into territory that doesn't really belong to me. In the background you can see the much more impressive structure built by a coworker of my brother. We are not keeping up with the Jonses.

Nvidia might be bankrolling new PC Game Remasters
So shelling out the extra 50 bucks or so for a 'RTX' 2080 instead of GTX 1080Ti has proven to be not really worth it. These two cards are mostly comparable from a pure throughput standpoint, but the newer RTX line can do "ray tracing". So far, only a couple of games really support it. With the PS5 and next Xbox promising ray tracing support there is hope that this number will increase, but for now it's not doing me much. The only game I've played which really uses it is Anthem. Anthem probably would have looked damn good either way but also wasn't exactly a barn burner in terms of gameplay.

One thing I did enjoy though was the RTX enabled version of Quake II that Nvidia released. The game really did end up looking completely different and I ended up messing around with it for a couple of hours.

If Nvidia wants to remaster some old classics in order to advertise their graphics cards then i see that as a win-win. I haven't played Minecraft with ray tracing shaders on but they look pretty incredible from what I've seen. If you can make Minecraft look good then I'm pretty eager to see what we can do with the likes of Duke Nukem 3D or the the old Thief games.

Riot Announces 15 Years of Games At Once
I have played exactly one game of League Legends in my lifetime. It was an introductory 5 vs. Bots match that was mandatory to continuing on into the real game. One helpful teammate was devastatingly unhappy with my character choice. Another called me a "bastardo" for stealing his kill. I suspect that's a Portuguese to English cognate, but I don't speak the language. We won decisively. I then played something else for the next 10 years.

More competition is always good, but since Riot makes Blizzard look like a competently run company, I'd rather steer clear of an unusually long burning car wreck.
Posted by Everwake at 8:47 PM