September 24, 2019
My weekend was admittedly not as focused on gaming as usual, as I ventured into the terrifying realities of the meatspace in order to acquire a companion pet. 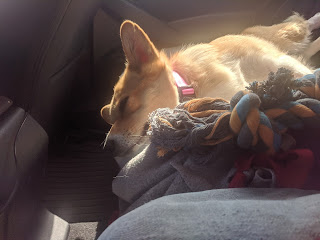 Herberta would not make a good hunter pet. She doesn't seem particularly interested in fighting and mostly seems to sleep a lot. She does follow you around however. Dismiss Pet does not seem to be an ability I've learned in real life.

I did get some gaming in these past couple of days. I finished off all the Battle for Azeroth reputations and grabbed the last of the Essences I'm going to bother targeting. Technically I need to do the "Paragon" mechanic where I can continue to earn reputation with a faction. Every 10,000 additional reputation gives you a loot chest with about 4,000-5,000 gold, some war resources, and occasionally a faction specific toy/mount/pet. In the cases for the Tortollans, they have two additional cooking recipe ranks that I'm interested in. I enjoy collecting as many of a professions recipes/ranks as possible but I'm just too burned out right now. The Tortollans are already the slowest faction to level in BfA, made worse by the incredibly poor variety of world quests they have. The "Another Turtle Made it to the Water" minigames are grating at this point, the Concentration mini-game is insulting to my intelligence, and the walk the disappearing sparkly path is just dumb. The 2x reputation buff week will return again in a couple of weeks. Perhaps I'll be more likely to give a shot then.

The Brewfest holiday has finally arrived and allowed me to finally finish the year-long meta achievement for my proto-drake that everyone else got nearly a decade ago. There are a variety of cosmetics and pets available so I've been running some of the ram racing dailies on alts, but I just don't feel committed to get everything. Transmog tends to be something that I set and forget on my characters. The Brewfest transmogs only last for the duration of Brewfest themselves, which makes them feel useless.

7.2.5 dropped today and with it the conclusion of the War Campaign. Everything after the line break is spoiler territory.


The "Battle for Azeroth" ends with a fizzle and another enjoyed lore character bites the dust. I'd say this beginning to feel like Hamlet but Shakespeare meant to tell his jokes. The 7.2.5 quests are all about gearing up for another invasion of Orgrimmar followed by....nothing. The cinematics were nice but World of Warcraft is a video game, not a movie. The actual gameplay here was so laughably token that I don't know why they bothered.

7.2.5 hints at some promising gameplay changes. The dissolving of faction warfare makes sense. We've had it for 15 years and can always enjoy it again through Classic now. The trick of course is that you have to replace it with something interesting. I have some doubts that this current dev team is capable of that. I'd genuinely love to be proven wrong, both Legion and BfA had some interesting changes to the WoW formula. But I suspect whatever is coming next will be closer to what we saw in War Mode. A change that seems to have been made to make the developer's lives easier than an actual interesting change for players.

The storyline at this point is just whatever. I've been slowly reading through the three original Dragonlance novels lately and the tone feels very similar. These are stock fantasy tropes and nobody at Blizzard seems particularly keen to move beyond that. The 7.2.5 cinematics seem to be preparing us for something huge and game changing and I actually feel disappointed about that. I would rather they take a page from Classic's playbook and play to their strengths, which is world building, not story writing. BfA went for a very cinematic tone but that's never once been Blizzard's strength. Use their expertise in game play, systems, art, and music to create the canvas from where players tell their stories. Easier said than done but at this point the storyline in World of Warcraft feels like the storyline in a Call of Duty game. It's there, I'm confident there are some people who love it, but at a certain point it became a developer's bullet point rather than something inherent good on it's own. Blizzard either needs to do what it takes to make WoW a narrative based game like FF14, or get back to having it in a supporting role that simply gives context for our character's actions.

With that said and done, I think it's time to take the pupper out for a walk. 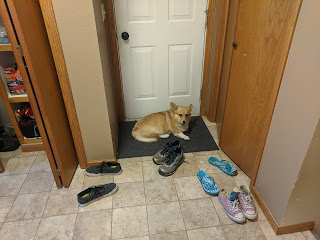