My Warrior in Classic is still level 31 and I don't think I've done anything more robust than checking a few auctions and turning in a couple of quests that had sat completed for a while.

Retail has two important events happening this week. Firstly is the double reputation on world quests event. I've had the various BfA reputations sitting close to exalted for some time now. I had made a concerted effort to reach revered with all of them in order to obtain flying. Since then, I've been logging in once every three days or so to clear out the emissary quests and get the free rep/gold/resources for little effort. With normally annoying reputations like the Tortollans and Rustbolt Resistance suddenly much less of a problem, I've been logging in every morning to clear the maps of world quests.

As of today I have everything but those two reputations on exalted. The Rustbolt Resistance should be done in two days time and Tortollans done tomorrow. Additionally, I finished the achievement in Nazjatar that unlocks the third rank of that particular essence as it's minor trait so prove to be a decent boost for my character. Unfortunately, I realized I don't actually have enough currency to purchase that essence until tomorrow. Bad luck.

The second major reason I'm logging into retail is the Brewfest event. Turns out, I never play World of Warcraft during the month of September. I know that, because I've every other holiday achievement completed since 2011. I'm not sure what it is about the fall that makes me WoW averse but its been pretty consistent for a while now. I'm guessing its the combination of Fall weather and college football that makes me less likely to sit in front of a computer for long stretches at a time. Maybe fall has just lacked tantalizing updates on the WoW front. Either way, I have WoW Classic to thank for helping finish the meta-achievement I've been sitting on for closing in on a decade.

Tomorrow should also be the end of my interest in Brewday stuff. The meta-achievement is what I'm after. The large amounts of pets and transmog gear isn't overly important to me. The mounts with a 2% drop chance are never something I'm particularly fond of grinding out.

So I suppose that leaves the question of my interest in retail after my reps are done. I suspect I will be on the sidelines until the next pet xp bonus event. I might not stick my head in the door and see if the Timewalking stuff is interesting but next week is Warlords of Draenor dungeons, not exactly an expansion I have nostalgic feelings for.

For reasons, that I can't actually remember, I had preordered the Link's Awakening amiibo some months back. 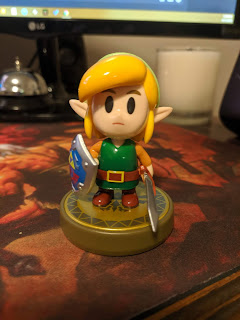 He's undoubtedly a handsome fellow, but I've never had the fondness for The Legend of Zelda that others have. My plan was to eventually get the Link's Awakening remake but I wasn't necessarily in a huge hurry to do so, particularly since I still haven't completed Breath of the Wild.

But tomorrow will be spent with me and the wife in the car for a ten hour trip. I expect my next couple of days will be a bit busy as well. I don't want to spoil the details, but the impact on my free time could be a bit ruff.