Today was a big day of gaming!

My morning was dominated by retail WoW's Brewfest holiday. For some reason I'm simply in the mood to grind out all of these toys/pets/transmogs. I've completed the introductory quests on six different characters now. I think that should be enough characters to eventually purchase every item I care about. The first day of Brewfest will give each character about ~180 tokens. Each subsequent day I believe gives ~50 tokens. With nearly a week left I think we will comfortably get them all.

Ram Racing is the main draw here. You get put on a ram vehicle that requires you to whip the mount a certain amount to get to speed and maintain it. For the actual racing, you simply jam the button about once a second and refill your "energy" by running into barrels of apples, apparently these rams eat very quickly. The key is to figure out the fastest racing line between point A to point B and back again while running into enough Apple barrels to not run out of energy and end up stuck going painfully slow. Both the Horde and the Alliance have a different layout, but the racing line for both is very close to a straight line, albeit partially disguised as more complicated by the terrain. Wowhead has a perfectly good guide for both factions. 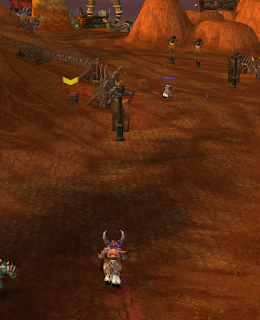 There's also another ram racing quest that asks you to bark for one of two rival brewing companies by riding to 4 checkpoints in Orgrimmar or Ironforge. There are no apple barrels so you stuck at slower speed going through a city you've seen a million times before. These are boring. 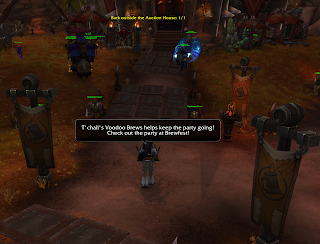 Lastly, there is a very quick boss each character can kill once a day for a chance at various prizes. This is done through the Looking For Group system like many holiday bosses, and each kill takes literally under a minute. The main prizes here are two Brewfest specific mounts, a kodo and a ram. I've got the kodo thus far, and I'm hoping for the ram soon. Each mount has about a 2% drop rate which is not as bad as it seems since you'll get so many chances at it each year. There are also some transmog items. Notably, there is an on-use item drop that will create an Iron Drill in the ground. Anyone who clicks on this will get teleported to the bar inside of Blackrock Depths. Curiously, this item isn't a toy, so it takes up inventory space. Also, I don't know why anyone would want to go to the middle of BRD that badly. 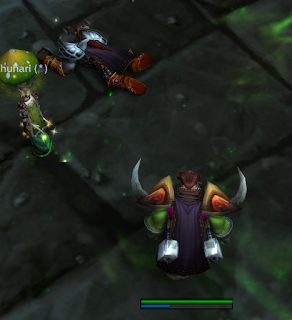 The new addition this year is the Brewfest Chowdown. Each game requires four different players before it will begin, and only one person will win. Kinda like the water squirting games you see at amusement parks. You start with a plate of 2-4 sausages. Pressing 1 will eat one of the sausages but also cause a random amount of your "choke meter" to go up. If you get to 100 choke points, you will be locked out from pressing any buttons for 3 seconds. Sometimes. It's random if eclipsing 100 points causes you to choke or not. It seems to happen the closer you were to 100 in the first place. Pressing 2 will let you drink a brew that will cause your choke meter to go down by about 40 points. You get three charges on this with a 10 second cooldown. Once you finish your plate, you press 3 to get another one.


It's unfortunate that their is so much randomness in the minigame. It's not that difficult to play it perfectly so Blizzard is clearly relying on the random chance to differentiate winners and give slower players a chance to win. Blizzard relying on randomness to give a simplistic system more robust gameplay has been pretty much World of Warcraft's problem from it's inception. My server's chat was complaining about it pretty hard. Can't say I wholly disagree. Either way, 5 wins gives you a trophy. 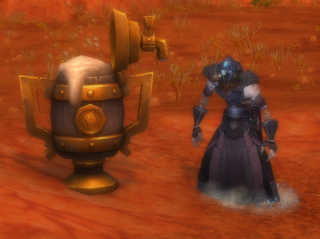 It's a damn big trophy and also gets your character a little drunk. I plan on breaking this out after killing a flag carrier in a battleground. Feels like the right about of obnoxiousness.

I've gotten both of the mounts to drop, if you're curious as to what they look like:


Unfortunately, they are very simple reskins of two very common mounts. I doubt I'll break these out very often.

In Classic me and my group just finished up Razorfen Downs. I'll go ahead and say it was quite boring. I'm quite well geared at this point as the tank and with a competent healer and two dps who can CC there just wasn't much challenge. We had one bad pull where we ended up with 6 mobs and I was able to tank without even hitting Shield Wall. In fact I haven't hit Shield Wall at all. I have no idea what the move even looks like. Perhaps it's time we either got more aggressive with our pulls or started taking dungeons that are much higher levels than us. Even with us four manning everything, we just aren't feeling the challenge I'm craving.

And last but not least, I finished Molten Core and am now Exalted with Hydraxian Waterlords ... on retail. 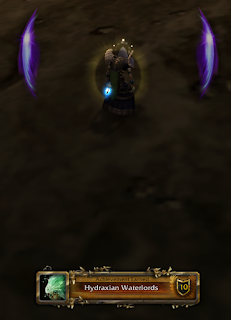 I doubt anyone will be Exalted in Classic for several more months. I've been farming Molten Core for a long while now in order to finish the last Classic Reputation achievement. Feels good to have that one off my gaming checklist, it's been on there for a while.