As I finish up a run of Blackfathom Deeps with the Familia de Everwake, I'm struck with a reminder as to why the Scarlet Monastary dungeons were so popular.

It's because they were short.

My neck and shoulders are stiff and I've got a case of the grumps. The dungeon run went well, we only had one wipe, but that's just a lot of time sitting for me. Out of all the things I missed form WoW Classic, the time commitment required from basic dungeons isn't one of them. I've always preferred shorter but more often play sessions. That's really the one major design choice of Retail WoW that I unilaterally preferred over Classic.

Granted there are a lot of great reasons to have super duper long dungeons in the game. It makes them feel like real honest to God dungeons and not just another level in a linear video game. It's a good choice, it's just one that's a literal pain in my butt. I'm going to start keeping the foam roller in the computer room if this keeps up.


With all that said and done I'm a healthy and hearty level 32 now. The best part of doing all these dungeons with our group is that I'm the only mail wearer/melee attacker. My little guy is rocking blues in about every slot a level 32 can have in Classic. 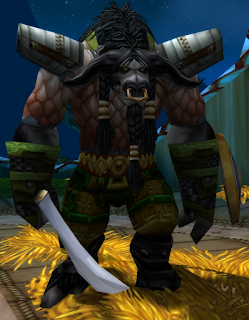 But good God this gear is so ugly. Leveling has always left characters looking like clown fiestas but usually there is a certain charm to it. Casters just look like absent minded academics who were really late to work. Blizzard's 2004 rendition of chain armor looks like snake skin after it's been shed.

In more alarming news, I'm 8 levels away from my mount and currently stuck at 8 gold. I think we may be hoofing it for a while as the mount plus riding skill cost 10 times that. Back in the day when Classic was current content, I got the money for both my level 40 and level 60 epic mounts by playing the auction house. This was before auctioneer was an add on and you could make pretty good money by buying materials in the morning when demand was lower and then selling them for more in the evening; this is particularly true if you buy out every competitor and immediately relist that stock at a much higher price.


I got impatient for the last 100 gold I needed for my epic mount so I took a more direct approach. I would look up Darkmoon Faire cards on the AH, note their prices, and then immediately offer them in trade chat for 20% more. Someone would whisper me, I'd buy the card off the AH, and then teleport to whatever city they were in.

Unfortunately, the economy at this point in Classic just isn't robust enough to support these kind of shenanigans. Drops are still so rare and buyers so few that there isn't enough confusion and laziness to take advantage of yet.

Oh well, 60% increase in movement speed matters but it's not the end of the world if I end up hoofing it into my mid 40s. It might kill me a little inside as I get passed by someone lower level than me on their mount but that's just how it's going to be.
Posted by Everwake at 11:16 PM