There Has to Be a Better Name Than Auto-Chess.

My gaming experience hasn't been overly varied recently, mostly I've just been grinding out World Quests in World of Warcraft for various reputations. But I think I like this blog better when it's acting as more a video gaming journal, so today I want to get back to that.

I gave DOTA Underlords a try. I was keen to see what this new fad for Auto-Chess was. I played through the tutorial and was immediately hit with several thoughts:

Competitive gaming hasn't been my thing for a while now, so the chances of me getting into the Auto-Chess genre were never great. But there really isn't anything here that appeals to me. It seems like Auto-Chess games probably take somewhere between 30 minutes to an hour, and I would really gaming sessions that I can build in increments of 20 minutes or so. Having another bunch of gaming related items I need to memorize just doesn't appeal to me. I have no previous experience with DOTA or League of Legends so I'm starting from ground zero for both.

The last time I played any game competitively was either World of Warcraft Arenas  or Counter-Strike 1.6. So that's been nearly a decade then. Unless I undergo so major change in interests, it seems my competitive gaming days are likely done.


I have been going a bit ham on various WOW achievements though. Battle for Azeroth seems to have packed their overworld with treasures, rare mobs, and various bits to find. Now that I can simply fly to those areas I'd like to try and get those done. There was also a rare mount in Nazjatar that could be had today in a complicated process. The first step requires playing some trading mini-game among 5 murlocs in the zone hub. 4 of the murlocs have several items for sale. Each one has 1 item that can be bought with gold, and everything else requires items from each other murloc. The process quickly becomes convoluted. Thankfully, there is a website known as Mrrl.io that handles all the critical thinking for you. The final step for the mount requires a rare mob known as Murloco. According to general chat I had in fact just missed him, so I set up camp at his spawn and began making myself lunch. Thankfully, however, I had the good sense to check the LFG tool and see if he was up on someone else's server. Eventually he was and that mount was secured. 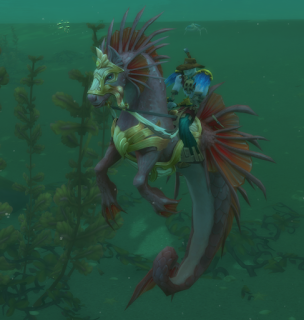 The Crimson Tidestallion is an underwater only mount, so while it is useful, it just won't get used that much. It's not an unhandsome mount, but I do wish the Crimson was much brighter. At this point, our poor guy looks like he was left in the sun.