It's been six days since I started blogging and I have received neither the fame or the fortune I was expecting.

I'm as disappointed as you are.

It's pretty clear that I need to ratchet things up around here. We need a gimmick, a slogan, something that we need to separate this blog from the rest of the pack.

(Growing a readership with sustained and thought provoking entries for a long period of time is obviously not an option. Perish the thought.)

We need something bold, something marketable, something that we can hopefully print on t-shirts.

We need a mascot.

I present to you, Tuskarr the Blog Boar. 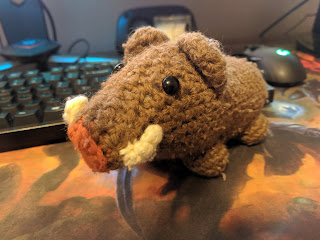 An Internet Journey requires an Internet Squire. Particularly a cute one.


My wife crocheted me this little guy back during the Hearthstone launch when my favorite go to move was playing a Stonetusk Boar with charge and then buffing him with two Power Overwhelmings and sending him on into my opponent's face.

I fell off the Hearthstone treadmill years ago and have zero interest in spending the money needed in order to catch up. But those few several months during the beta and after launch we're a special time and it's nice to have a lasting souvenir.


I finished the first part of the Pathfinder achievements in World of Warcraft last night. The only thing separating me from flying in the current expansion is a couple of more days of Mechagon and Nazjatar dailies.

For some reason I have been fanatical about getting my ability to fly "back". I don't actually know what I'm motivated to do once I get a hold of it. Ironically, finishing Pathfinder back in Warlords of Draenor was the exact moment that I quit the expansion. Legion was able to hold my interest as Antorus would come out only a week later. I wonder if Battle for Azeroth has enough mileage to keep me interested this time or not.
Posted by Everwake at 1:53 PM